Home ›
Our Pet Experts ›
Understanding Heart Disease: Do Pets and Humans Have Anything in Common?

Understanding Heart Disease: Do Pets and Humans Have Anything in Common? 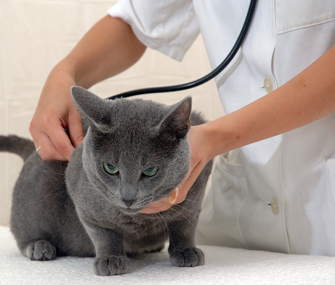 As cardiovascular disease becomes increasingly common, the American Heart Association and other health organizations are ramping up their efforts to educate and motivate the public about the importance of heart-healthy foods, exercise and other ways to combat heart disease.

But what about our animal companions? Can parallels be drawn between human heart disease and feline and canine heart disease?

Veterinarians at Tufts University recently looked at this very issue while developing the new Cats’ Assessment Tool for Cardiac Health (CATCH) survey for veterinarians to use when seeing feline patients. The questionnaire prompts owners of cats with heart disease to assess a pet’s quality of life — and it was inspired by a similar quiz used with human heart-disease patients.

Vetstreet sat down with Dr. John D. Bonagura, DVM, DACVIM, a professor of veterinary clinical sciences at Ohio State University College of Veterinary Medicine and head of the cardiology and interventional medicine service at the university's veterinary medical center, to look at just how similar — and how very different — heart disease is in human, feline and canine patients.

How Prevalent Is Heart Disease?

Humans: Heart disease is the No. 1 cause of death for Americans. The AHA’s 2012 update on heart disease reported that, in 2008, cardiovascular disease caused more than 30 percent of deaths in the United States.

Dogs and Cats: Although reliable mortality statistics are not available for adult felines or canines, heart disease is not the leading cause of death in either species. That said, cardiovascular problems are relatively common — at least 10 percent of dogs develop valvular heart disease, a percentage that doubles for dogs who are over the age of 9. When it comes to cats, tracking heart disease is tricky, since felines often show no symptoms of the disease.

What’s the Most Common Form of Acquired Heart Disease?

Humans: Coronary artery disease is the most prevalent kind of heart disease found in adults. The main type of CAD involves plaque buildup in the arteries (atherosclerosis) that are responsible for bringing blood to the heart. As the layers of plaque grow and harden, less blood flows to the heart.

Dogs and Cats: Coronary artery disease is not a concern for dogs and cats. “This is probably the greatest difference between humans and their pets,” says Dr. Bonagura, a founding member of the Cardiac Education Group, an organization that offers resources and recommendations for heart disease in cats and dogs.

Mitral valve disease and dilated cardiomyopathy (DCM) are the most common canine heart diseases. Mitral valve disease affects a valve on the left side of the heart. As the valve’s flap gets thicker, it doesn’t close properly, causing blood to back up into the left atrium instead of exiting the left ventricle. Older, small-breed dogs are more likely to develop mitral valve disease, with male dogs having slightly higher odds than females.

DCM, meanwhile, weakens the heart muscle, so that it pumps less strongly and regularly. This condition is more common in large-breed dogs, like Great Danes, and some Spaniel breeds.

Pericardial effusion, when fluid collects in the sac around the heart, is another common canine heart condition that most often afflicts elderly dogs.

Eventually, DCM, mitral valve disease and pericardial effusion can all lead to congestive heart failure, causing fluid to leak out into the lungs.

Cats, on the other hand, are prone to hypertrophic cardiomyopathy (HCM). The walls of the heart thicken, the muscle becomes less flexible and the heart pumps less blood. HCM is a genetic disease that affects both mixed-breed cats and such purebreeds as Maine Coons.