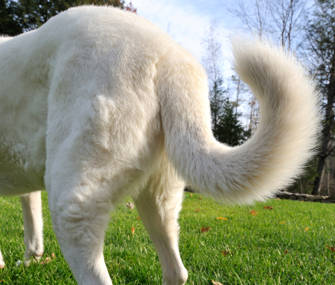 iStockphoto
What does that tail wag really mean? According to experts, it can convey a lot more than you think.

Does that wagging tail really mean that he’s happy? Don’t count on it. As is often the case with people who we think we know, there’s a lot of misunderstanding going on between man and his canine best friend.

It’s certainly not for a lack of effort on the dog's part: Recent studies have shown that our faithful companions can track human eye movements, sniff out diseases — sometimes before our doctors do — and wag their tails differently for their owners.

But since dogs haven’t mastered English yet, there’s a good deal of mind reading required when it comes to understanding canines.

“With dogs and owners, it is not so much a dialogue but a monologue,” says Anders Hallgren, a Swedish animal psychologist and the author of The ABCs of Dog Language. “Owners take over the communication and don’t listen or don’t read what the dogs are saying.”

From half-moon eyes to demand barking, there are myriad ways that our four-legged wonders try to communicate with us every day.

The Eyes Have It

“If you look at dogs’ eyes, you can see so much,” says Hallgren. “There are so many muscles around each eye that they can quickly change from attack mode to flight mode to ‘I’m starving mode' — especially if they’re near the table.”