“You often see this when children hug a dog,” says Karen Pryor, author of Reaching the Animal Mind. “The head is lowered and turned away, and the whites of the eyes are showing, which is like us clenching our fists because we hate what’s happening to us."

In addition to telegraphing their own needs, dogs also seem to have an ability to read our minds. According to a new study, this isn’t actually doggie ESP, but the result of some rather keen powers of observation. 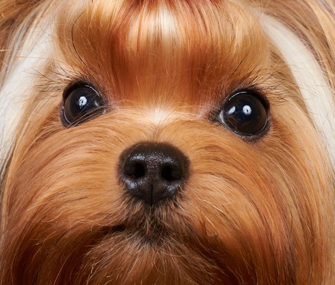 Thinkstock
Recent studies have shown that dogs can track our eye movements.

Researchers recently recorded dogs tracking humans’ eye movements, as if trying to decode intent — a phenomenon akin to a baby watching his parents. “Dogs are receptive to human communication in a manner that was previously attributed only to six-month-old human infants," coauthor Jozsef Topal told Discovery News. “They can play the role of being a child substitute.”

And, just like babies, our favorite fuzz balls may even be able to read human expressions.

In a study conducted at Azabu University in Japan, dogs were shown photos of their owners either smiling or with neutral expressions on their faces. The canines were trained to only identify photos of smiling owners. When they were shown photos of non-owners, many of the dogs still flagged pictures of humans who were smiling.

This behavior isn't necessarily innate to canines — who usually equate bared teeth with aggression — but it's one that may have been learned thanks to constant contact with humans.

What is that propeller of a tail really trying to tell you? Truthfully, it can signal anything from elation to aggression.

“A lot of trainers will tell you that a truly happy dog will wag his tail in a circle,” says Pryor. “If a dog does that, you should feel very complimented.”

But it can also be a common sign of aggression. “There’s a lot of misunderstanding,” says Dr. Jules Benson, BVSc MRCVS, a veterinarian at the Doylestown Animal Medical Clinic and a member of the Board of Trustees for the Pennsylvania Veterinary Medical Association (PVMA). “A lot of slow tail wagging is exploratory and often a sign of ‘I’m excited or scared,’ while lateral movements are a sign of indecision. Bouncing up and down? That’s a happy tail.”

As for the direction of a tail wag, well, that all depends on who’s approaching. According to a recent New York Times piece, when dogs feel positive about someone, their tails wag more to the right. When they have negative feelings, the wagging is biased to the left.

Just don’t be surprised if it’s hard to see evidence of this at home. “The degree of the movements was statistically significant but hard to observe,” says Dr. Benson. “The researchers had to rely on stop-motion photography.”