As the old saying goes, the nose knows — especially with pooches.

“Dogs are capable of sniffing everything from drugs to electricity,” says Dr. Michael A. Selmer, DVM, of the Advanced Animal Care Center in Huntington, N.Y. “Recent studies suggest that they may even be capable of detecting human illnesses, like epilepsy and cancer, with their noses.” In fact, when asked to sniff out colon cancer in a recent study, canines were 90 percent accurate or “just below what a colonoscopy is able to do,” adds Dr. Benson.

So what makes Fido such a super sniffer? According to Dr. Selmer, a dog’s olfactory glands are about four times larger than ours, and their brain is about 10 times smaller. “This means that your dog’s brain has 40 times as much of its brain devoted to smell than we do,” he says, adding that a dog’s sense of smell is estimated to be 100,000 times better than his human owner.

This is partly why dogs are often attributed psychic powers — but it’s more that their noses know no bounds.

A dog can smell fear — or at least the pheromones that are released when we’re afraid, says Dr. Selmer. “Sniffing chamomile can make your dog calmer, whereas peppermint can make him more excited,” adds Dr. Selmer. “All these things make him one special creature.” (Though be sure to speak with your own vet before trying any kind of aromatherapy with your dog.)

Can You Hear Me Now? The ABCs of the Canine Bark 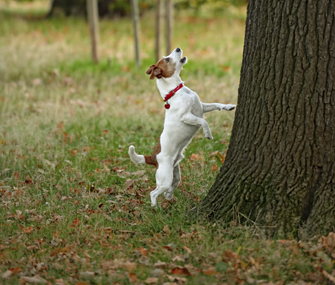 Thinkstock
Canines bark for a variety of reasons, including fear and even to sound an alarm call.

And then there’s that most domesticated of barks: “Animals often learn to bark to get you to do something,” says Pryor. “That’s called ‘demand barking,’ and this is definitely something you don’t want to encourage.”

Howling, on the other hand, is a more primitive habit. “That’s a more instinctive type of behavior,” explains Hallgren. “Dogs are born with it.” Baying at the moon — or a neighbor’s Cockapoo — may hark back to an innate need to strengthen pack bonds. Wolves, for instance, will wake up and howl in unison before heading off to hunt.

One thing that always precedes howling is what experts call a “key stimulus,” such as another dog or a fire engine. In other words, there’s usually a good reason why a dog lets loose.

But if he starts to howl when no one is home, it may be your behavior that needs changing. “The dog is calling you and asking you to come home,” says Hallgren. “It’s a symptom that he feels lonely.”

Of course, there is one ubiquitous bark that can (and should) be corrected — barking at the door. “This is a bark we treat totally wrong,” says Hallgren. “We rush after the dog, and try to silence him.” The problem with this approach? When the dog hears the doorbell, he wants the whole pack to go with him because he knows there’s strength in numbers.

Instead, Hallgren advises dog owners to equip everyone who passes through the door with a treat, so that the dog learns to equate the doorbell with a reward for good behavior. In other words, take a wag the dog approach to bark management.