Home ›
Our Pet Experts ›
Lisa Granshaw ›
Valentine’s Day Is All About Lovebirds — But Where Did the Term Come From?

Valentine’s Day Is All About Lovebirds — But Where Did the Term Come From? 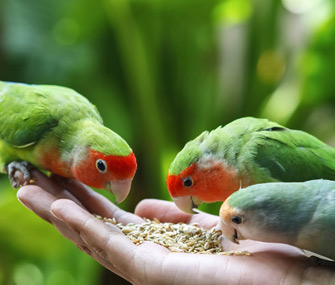 Love is in the air more than any other time of the year right now, as couples get ready to celebrate Valentine’s Day. You might notice people being more openly affectionate in public to display how much they care for each other, whether it’s holding hands as they walk or kissing in the park. These actions tend to make people refer to such couples as “a pair of lovebirds,” but why do we use that term?

The Link to Lovebirds

You’d be right if you suspected that the word’s origins could be traced to an actual bird species. “Lovebirds” refers to several small, short-tailed parrot species, most of which have predominantly green, blue or gray plumage. The parrots are native to Africa and Madagascar. Among pet owners, the birds are popular as cage birds.

Above all else, these birds are known for their extremely caring behavior toward one another. Pairs typically mate for life and are usually very affectionate. Lovebirds will often sit together and caress or preen their mate. These overt demonstrations of affection are why we use the same term to refer to similar behavior in humans.

The History of Valentine’s Day and Birds

The first connection between St. Valentine’s Day and romantic love can be traced to the 14th-century English poet Geoffrey Chaucer, and lovebirds play a part! According to UCLA medieval scholar Henry Ansgar Kelly, King Richard II employed Chaucer in his court. On May 3, 1382, a year after the king announced his engagement to Anne of Bohemia, Chaucer commemorated the first anniversary of this event by writing a poem titled “Parlement of Foules” (“Parliament of Fowls”). In it, he compares the mating rituals of birds to those of humans.

Chaucer wrote, "For this was on Seynt Valentyne’s day, whan every foul cometh ther to choose his mate" (“For this was on St. Valentine's Day, when every bird cometh there to choose his mate"). The poem implied that St. Valentine’s Day was when birds come out to mate and relationships are established. The connection between this day and romance — and lovebirds — resulted in the birth of our current holiday.

The Evolution of the Term

From that point on, the term “lovebirds” was used in both capacities. An interesting example of its use referring to birds, according to the Oxford English Dictionary,is in 1595 when John Lyly included the term in the comedic play The Woman in the Moone in the line “Ile give thee ... Love-birdes whose feathers shal be beaten gold.” The term is continually used to refer to affectionate couples as well, according to the dictionary, such as in an 1858 reference in the December issue of Harper’s Magazine: “What are the love-bird’s initials, I wonder?”

For such a commonly used term, when it comes to romance, “lovebirds” certainly has an interesting history and a tradition going back centuries. It’s something to keep in mind when you use the word this year!