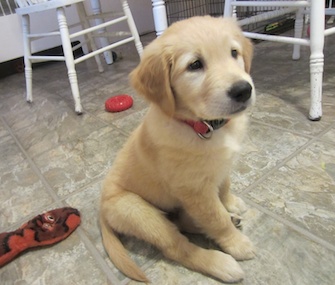 Courtesy of Janet Keeler
Janet Keeler raised Fawn for The Seeing Eye in 2012.

You bring home an adorable 8-week-old puppy. You housebreak her, teach her basic commands and take her everywhere with you. Then, when she’s 16 months old, you give her away.

For Janet Keeler, that scenario has been replayed 52 times — and she wouldn’t have it any other way. Keeler, 76, is one of an army of volunteer puppy raisers for The Seeing Eye in New Jersey.

The mother of six got her first guide-puppy-in-training for the Seeing Eye in 1981, because she thought it would be a good experience for her then 11-year-old daughter. Since that time, she’s raised puppies with her other children and with her grandchildren.“It’s easier to housebreak a puppy than to toilet train a toddler,” Keeler says.

She admits to falling in love with the pups but knows all her effort is for a good cause.

The work that puppy raisers do is invaluable to the guide dog schools for which they do it. The volunteers expose the pups to a variety of social situations and work and living environments. The four-legged students might live in the city or the country, meet kids and other dogs, hear different sounds and experience things that they might not if they spent all of their puppyhood at the schools. And they learn house manners early, which is essential to the blind owners they eventually live with. 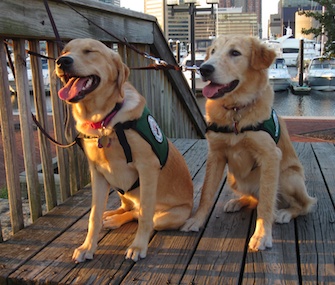 Courtesy of Janet Keeler
Fawn, right, with her sister, Flirt, went to Baltimore Harbor as part of her training with Janet Keeler, a volunteer for The Seeing Eye.

“God bless them. I don’t know how they do it,” says Joan Markey, a master instructor for The Seeing Eye. Markey, one of the professional instructors at the school, trains the pups when they return at between 16 and 18 months of age — and she has a soft spot for the puppy raisers. “I just love them because they do all the hard work.”

Like Keeler, many puppy raisers start out planning to raise just one pup but go on to do it for many years. They might be moms at home with young kids, college students, retirees or anyone in between.

People who are interested in raising a puppy go through an application process. The process varies at the different organizations, but certain fundamentals are the same: The school interviews the applicant to be sure he understands the commitment and has a safe home environment for the dog, instructs the person on how the dogs are trained and breaks him in a bit by having him visit with regional clubs where local puppy raisers gather regularly. Sometimes applicants will puppy-sit for a current volunteer to get an idea of what to expect.

Once that process takes place and a puppy is matched with a volunteer, the volunteer travels to the school to pick up the puppy or, in some cases, the school delivers the pup to the volunteer's area or home.

The puppies, who might be Labrador Retrievers, Golden Retrievers, German Shepherds, Standard Poodles or crossbreeds, spend the first few weeks hanging out at home, getting used to their new families and working on potty training.

Volunteers are required to bring their puppies to puppy club classes in their area, which are run by regional managers. They might be weekly, every other week or once a month, depending on the club. There, the puppies work on basic commands and the manager gets a sense of how each pup is progressing.

The clubs usually vary their meeting spots so that the students can experience a variety of environments at a young age. They might meet at a fire station, an airport, a park, a movie theater, on public transportation or in a mall — it’s all new for the little ones.

Volunteer Puppy Raisers: The Secret to Success for Guide Dogs

“The dogs are exposed positively to everything, so when they’re out in the world with their handlers, they can say, ‘Oh, been there, done that,” says Michelle Brier of Guiding Eyes for the Blind in New York.

“When they’re young, their socialization window is open, so they’re like, ‘Oh, I guess that’s normal,’” says Melissa Harrington, a regional manager for the Guide Dog Foundation in the Maryland, Virginia and Washington, D.C., area. If they visit a fire station, for example, and see the gear and hear all the noises typical to the site, they’re less likely to be spooked when they hear a fire truck racing by on the street.

There are 300 people raising puppies for the Guide Dog Foundation across the United States at any one time, Harrington says. In addition, Guiding Eyes has 450 volunteers and The Seeing Eye has approximately 500.

“We try to focus a lot on positive reinforcement with the puppies. We want it to be fun for both the volunteers and the puppies,” says Hallie Wells, puppy program manager for the Guide Dog Foundation, which is based in New York.