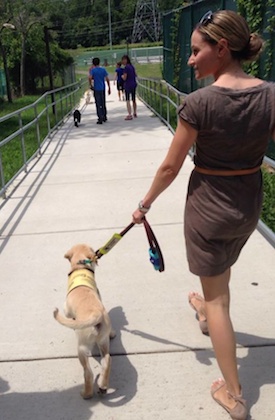 Harrington, who’s now raising her 14th puppy, tells her volunteers to just enjoy the pups for the first few weeks. By the time they’re about 10 weeks old, they’ve had enough of their shots and can join in a puppy club class.For the first one, she tells the volunteers, “Your only goal today is to make your puppy think this was the coolest, funnest thing ever.”

“They’re puppies — they don’t know they’re Seeing Eye puppies,” Keeler says. “You want them to enjoy puppyhood. Of course, they have to behave. They need to learn the ropes early.”

The puppies are constant companions to their raisers, just as they will be to their eventual owners. Their progress is monitored along the way through puppy club attendance.

“We are not trainers. We’re just regular people who are socializing these dogs and doing some very basic commands,” says Harrington, who was a naval officer for 20 years and got her first guide dog puppy when her third child was born. “If we’ve done our part right… they’re comfortable with screaming kids, shiny floors and escalators… and the trainers can give them what they need so they can work.”

“A little more than half of the dogs we breed become guide dogs,” says Brier of Guiding Eyes. The other half may go into the school’s breeding program, become autism service dogs or might be offered to agencies like the Bureau of Alcohol, Tobacco, Firearms and Explosives. “If you look at the pyramid of service dog work, being a guide dog is kind of like having your double Ph.D., and not every dog is cut out for that. We like to say that the dogs choose their careers — we never would place a dog that doesn’t enjoy the work.”

In Harrington's experience, the puppies who are more energetic and have a little more drive tend to make better guide dogs, while the more mellow puppies are better suited as assistance dogs for veterans or other similar work.

If the dog is chosen to be a guide dog, he starts training with a professional instructor at the school. The raisers are then invited back to see their dogs graduate from the program. 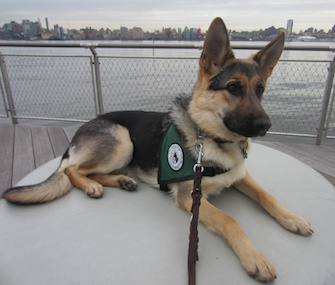 Courtesy of Janet Keeler
Janet Keeler says she has a soft spot for the German Shepherds she's raised, like Olivia, here in Hoboken, New Jersey.

But the volunteers see the fruits of their labor when they see their dogs helping someone, and the schools enjoy high rates of repeat puppy raisers.

“The reward is so much greater knowing that you can use the skills and knowledge that you have to help someone else have freedom and independence,” says Wells of the Guide Dog Foundation. “It’s all worth it.”

There’s one question all puppy raisers are asked repeatedly: How can they cope with giving up a dog they’ve bonded with?

“As for giving puppies back, is it any easier? No,” veteran raiser Keeler says. “Every time I give one back I say I can’t do it again. But then you get that cuddly little bundle of fur…”

And she’s ready to do it all over again.