Home ›
Our Pet Experts ›
Nora Zelevansky ›
'Wallace': Jim Gorant Dishes on His New Book and the High-Flying Dog Who Inspired It

'Wallace': Jim Gorant Dishes on His New Book and the High-Flying Dog Who Inspired It 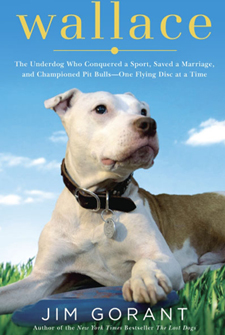 “One of the reasons [why] I became a journalist was to follow my curiosity,” says Jim Gorant. But the veteran Sports Illustrated editor never imagined that his path would lead him to the canine world. “It was a surprise to me,” he admits. “I had dogs growing up, and have always liked them, but [what] I'm really motivated by are incredible stories that present themselves.”

Gorant’s interest in animals was first piqued by the many unanswered questions that surrounded the rescued Pit Bulls from NFL quarterback Michael Vick’s dogfighting ring. The journalist wrote a cover story about the mistreated canines for Sports Illustrated, which ultimately led to Gorant's best-selling book on the subject, The Lost Dogs.

Almost two years to the date, Gorant’s latest pooch-related nonfiction book is now hitting shelves: Wallace: The Underdog Who Conquered a Sport, Saved a Marriage and Championed Pit Bulls — One Flying Disc at a Time. It's the true story of another Pit Bull who overcame the odds to become a competitive canine disc champion.

The Making of an Unlikely Canine Athlete

It was Wallace's owner, Andrew "Roo" Yori, who gave Gorant the idea for his new book. The men had developed a rapport while Gorant was researching the story behind the Vick dogs because Roo and his wife, Clara Yori, had adopted one of the pups, named Hector.

For Gorant, Wallace’s history was instantly engaging. He was rescued as a puppy from a shady breeding (perhaps even dogfighting) den, and when his police dog training didn't work out, he wound up in a shelter, where he was labeled "unadoptable" and sentenced to death.

That's when Clara and Roo Yori stepped in and rescued him.

“This dog had a number of things going against him — from prejudice against his breed to an unstable background — and he goes from the lowest of lows to the highest of highs," Gorant says. "It's a classic narrative journey from rags to riches."

Ultimately, Wallace became a great companion, as well as a superstar athlete.

A co-worker introduced Roo to canine disc, a sport that dates to 1974, when a man named Alex Stein ran onto a baseball field during a nationally televised game and tossed Frisbees to his Whippet. Stein eventually created the Frisbee Dog World Championship, which spawned canine disc organizations and events across the country that test a dog's speed and agility while fetching discs.

Pooches with strong prey instincts generally make good disc athletes, although Pit Bulls aren't the most common breed to compete. Roo tried the sport with a different dog at first, but as evidenced in the below video, it was Wallace who ended up having the gift. He's since won countless titles at events like the Skyhoundz World Finals and the Purina Incredible Dog Challenge.