We Learned the Hard Way That Heartworm Prevention Is Necessary

Signs There Was Something Wrong 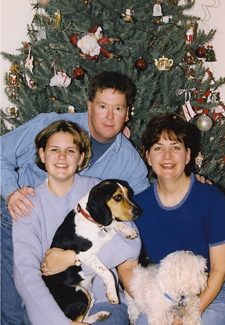 Photo by Jenn Andrlik
Our dogs were such a part of the family that they made the Christmas card photo.

In early 2009, my parents started to think something was wrong with Bailey. He wasn’t eating like he usually did, and he seemed lethargic. So my mom took him to the family vet. That was in March.

The vet conducted blood tests and suspected that Bailey had some sort of autoimmune disease. He still wasn’t himself in June, so my mom took him back to the vet. That’s when they conducted a heartworm test and the vet came back with a diagnosis of heartworm disease. Before treatment, the vet did X-rays and an echocardiogram to evaluate the severity of the disease and see if there was any damage to his heart, a process called “staging.” Bailey then received the heartworm treatment, and the vet kept him for two days for observation.

The Road to Recovery

When Bailey came home he was prescribed steroids, which my parents gave him daily. We were also advised to restrict his activity, which meant my parents had to keep him on a leash and deter him from running. The reason? As the worms die, they can break apart and the pieces can leave the heart and enter the circulatory system, where they can act as clots. Exercise makes this more likely.

“I felt terrible and very guilty that I hadn’t done what I could to prevent this,” my mom says. “It was hard on him because he couldn’t run or play, and it was a lot of work for us because we had to keep a very close eye on him instead of letting him run in our fenced-in yard. Plus, it cost a lot of money for his treatment.”

Bailey was better by mid-July, and a few months later the vet tested him again for adult worms and microfilaria (the immature worms). He was clean — and he continued to live a healthy life for many more years. We were lucky. As of now, there are no medical treatments for heartworm disease in cats, but in rare cases veterinarians may surgically remove the adult heartworms.However, unlike with dogs, it’s the immature worms that are usually more problematic in cats.

The treatment cost my parents 10 times what the preventive medicine would have cost, not to mention a lot of guilt for putting the dog through the treatment and, of course, the additional time they spent caring for him. After that, all of my parents' pets were given heartworm preventive as prescribed by the vet.

“I would never skip it again after what happened with Bailey,” my mom says. “Thankfully he made it through it, and we got to enjoy him and our other dogs after that. It’s a hard lesson to learn, but a good one.”