Welcome to the Year of the Horse 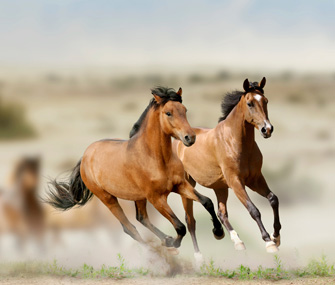 It’s time to say goodbye to the Year of the Snake and welcome the 2014 Chinese New Year. With this New Year comes a new animal from the dozen in the Chinese Zodiac: the horse! The Year of the Horse begins today and continues until February 18, 2015.

What It Means to Be Born in This Zodiac

Each Chinese zodiac animal has certain characteristics that those born during the year are said to share.

Just as horses display an intuitive nature, people born in the Year of the Horse often follow their instincts and have good judgment, which helps them make the right decisions and act quickly in situations. They also share the social nature of horses (who prefer to live in herds), as many people born during this time enjoy crowds, parties and having lots of friends. Their natural charm means they tend to attract people easily. Like horses, these people are often clever and intelligent. They're inclined to be carefree by nature, loving freedom and rebelling against constraint. Often they are also good communicators — just like horses, who use a unique combination of vocalizations and body language.

Specifically, this year is that of the wooden horse. Each year is often tied to one of the five elements: wood, water, earth, fire and metal. Wood is associated with the color green and springtime, so some refer to this year as that of the green wooden horse. A wood year means that many of the above mentioned traits would be intensified.

How do you know if you’re a Horse? This is your zodiac animal if you were born during the following time periods:

It’s no surprise that the horse found its way onto the rather exclusive list of Chinese zodiac animals, as it appears in many mythologies of cultures around the world.