Home ›
Our Pet Experts ›
Linda Lombardi ›
What Happens When Zoo Animals Get Out?

What Happens When Zoo Animals Get Out? 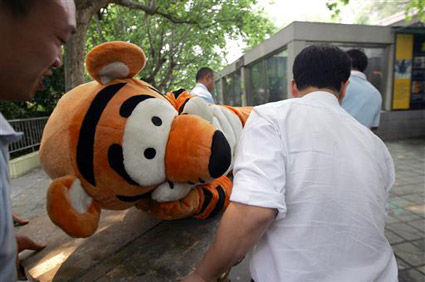 AP
A staff member at Chengdu Zoo in China dressed up as a tiger for the zoo's escaped animal practice drill.

Yesterday our news feeds were filled with updates about Rusty, a red panda who had escaped from the National Zoo. He was found in a bush in a nearby neighborhood and returned to the zoo, but it was a reminder that animals sometimes can outwit even a well-designed exhibit. Zoos prepare and practice for these uncommon events, as Vetstreet's Linda Lombardi knows firsthand.

One thing I learned about working at a zoo is that you need to be prepared for the unexpected. Take the time I walked out of my building into the path of an escaped lion.

Fortunately for me, the "lion" was actually a person in an orange vest with a sign that said "LION" on the back — because this happened when the zoo was doing an escaped animal practice drill.

You might imagine capturing an escaped zoo animal as involving a lot of running around and shooting tranquilizer guns. Dart guns are sometimes part of it, but not nearly as often as you might expect. And minimizing running is a big part of the strategy.

Safely recapturing a loose animal requires knowledge about animal behavior, starting with the fact that for most zoo animals, being outside their exhibits is not exactly good news. They're in an unfamiliar place that doesn't feel safe, and they probably didn't really mean to go there in the first place.

Dave Bernier, general curator at Lincoln Park Zoo, says that in his experience, escapes are usually a side effect of some other problem, not because it's an animal's goal to run free. For example, one escape was the result of a group of gazelles fighting. "This animal jumped out because it was being pursued," he says. "It didn't want to go there, but that's where it ended up."

Once away from the conflict, the gazelle didn't keep running — it just lay down. That's when the staff needed to react quickly, with the goal of keeping the animal still and restricting its options. "A lot of times animals will seek to go back to their enclosure if given the opportunity, so we try to give them a choice where they can do that," he says.

For a large animal that isn't life-threatening, the zoo uses a variety of equipment to keep it contained and encourage it to move in the preferred direction, without getting close enough to spook it or risk human injury. One approach is to set up a perimeter around the animal using barn curtain material that's stored in large spools in various locations throughout the zoo so it's ready when needed.

"We can make a visual barrier with this material that's like 25 or 30 feet long with only a few people," Bernier says. "The animals don't know how solid they are, and they generally don't test them as long as you provide them with enough room to move and they don't feel threatened."

Since the barrier is flexible, it can be used to funnel the animal where you want it to go. Another kind of moving barrier can be made by carrying wooden boards with handles."We have all different sizes, from small shield size to full 4-by-8 boards with handles and eye cutouts, all the way to rolling baffle boards," he says.

With all these barriers, the idea is to take as much time as needed and to not spook the animal, which requires attention to its flight distance, or how close you can get before it will bolt. But sometimes a quicker result is needed.

"We also use everyday items like CO2 fire extinguishers and air horns," Bernier says. "If you need to keep an animal away from a downed person or away from an open gate, the CO2 extinguisher is loud and very visual. It really gets their attention and can stop them in their tracks."