What It's Like to Live With Big Dog Breeds 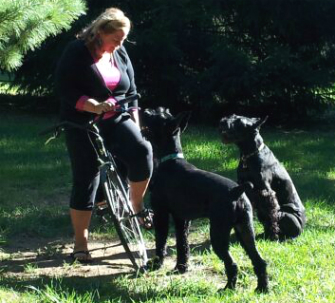 Look Before Leaping Into Adopting a Giant Schnauzer

Teresa Davila shares her Salem, Wisc., home with three Giant Schnauzers — Rica, Elvis and Tank. Yet in her role as a volunteer for the national HT-Z Giant Schnauzer Rescue, she does everything that she can to talk people out of adopting this challenging breed.

"This is definitely not a breed for everyone," says Davila, who constantly fields calls from people needing to surrender their dogs.

Davila's first Giant Schnauzer caused more than $10,000 in property damage to her home before she properly educated herself on how to train and guide the headstrong, high-energy breed.

"I describe them as a thinking person's dog because the Giant Schnauzer will think about everything you're doing, and about every command you give them, before acting," says Davila. "Watching them move is like looking at an Arabian horse — both have such a show presence."

Other concerns to consider: Giant Schnauzers weigh between 85 and 95 pounds, so they're not suitable for apartment living. They're also powerful runners who may nip as a result of herding instincts — and they are not big into having a lot of canine pals.

"Their loyalty is fierce, and they make for a fabulous home security system," adds Davila, alluding to the fact that these dogs will bark loudly if someone unknown dares to ring the doorbell. "And expect to be thoroughly interviewed by a breeder because this is a high-energy dog who needs focus and plenty of activities." 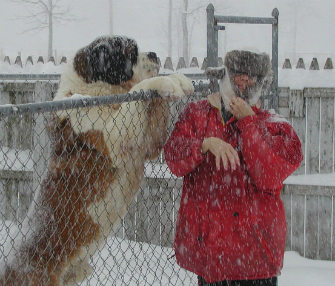 Photo by Beverly Nosiglia
Nosiglia with one of her Saint Bernards.

For 45 years, Beverly Nosiglia has been hounded by packs of Saint Bernards.

"Saint Bernards are devoted, loyal, calm and just a delight," says Nosiglia, a veteran American Kennel Club judge. "Don't expect to get up quickly from your chair because this is a breed that's happy to lie down on your feet for hours. And we're talking about dogs who weigh between 145 and 155 pounds for females, and 180 to 190 pounds for males."

Her family operates the Beric Kennel on a two-acre property in Romulus, N.Y. In addition to spacious kennels with large runs, her pack of Saint Bernards have access to the family's two-car garage, which has been converted into an air-conditioned "canine condo," complete with a bathing station.

If you're smitten by this breed, be prepared not to throw in the towel, but to bring a towel, thanks to the breed's tendency to drool. There's also something else you'll see a lot of — kibble. Each of Nosiglia's Saint Bernards consumes eight cups of food a day!

There are some other caveats to this canine. "Sadly, they are prone to bone cancer, hip dysplasia and seizures, and they only live, on average, 8 or 9 years," says Nosiglia. "They need access to the outdoors, where they can play, run and bounce. And they give off a lot of body heat. But they live to please you."