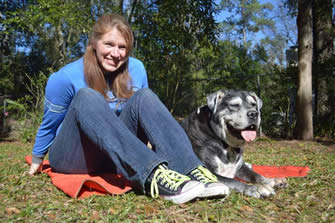 The transition will be easier if you do some explicit training. “The more you work with them the more you speed up their adjustment,” Levin says. “If you don’t train with them, they have to learn by their failures, and that’s kind of demoralizing for all of us.”

Training will help with safety as well. “Teach them words like 'wait,' 'stop' — so that you speed up their recognition of obstacles,” Levin says. “If you see she’s about to hit the coffee table, you can say, 'Wait!'”

Vaughn says when Floyd went blind, his first new commands were “step up” and “step down” for curbs and stairs. He also knows "freeze," as well as "tree" to help him avoid running into obstacles. “I yell, 'Tree!' and he swerves,” she says. For taking walks, the most helpful thing was working on his “heel” command so he was always right at her side.

It can be frustrating when you do something wrong or can’t figure out how to help. Vaughn recalls with chagrin the first time she took Floyd for a walk. “We’re walking along, and I’m being so careful so he doesn’t trip over anything, and we step off the sidewalk so he can pee, and I walked him straight into a concrete light post.” These things will happen sometimes, so remember to be patient with yourself as well as with your dog.

Also realize that no matter how much work you do, your dog will still have to learn some things on his own, and it may be hard to watch.

“There comes a point where you have to let the dog figure things out for itself,” Stiles says. “Every time the dog goes over and bumps into the wall, I know it breaks your heart, but that is how it’s learning its new world.”

There’s no predicting how long it will take a dog to adjust, since all dogs react differently, but the dog’s basic personality plays a big role. “Dogs that are relaxed and amiable and laid-back to begin with often adapt the fastest,” Stiles says. “Those that had nervous personalities when they could see are probably going to have more anxiety, and it’s going to take a longer time.”

Although some dogs will seem cautious and subdued at first, Levin says that if your dog's blindness has been diagnosed as due to SARDS (Sudden Acquired Retinal Degeneration Syndrome), watch out for signs of severe depression. Research has shown that these dogs may have abnormal hormone levels.

Having a newly blind dog can be a lot like having a new dog — doing new training and adjusting to new ways to perform your old routines. But it may not change your life as much as you think in the long run. At first Vaughn assumed she wouldn’t be able to move for the rest of Floyd’s life so he wouldn’t have to find his way around a new house, but that’s not how it turned out. “I bought a house, and he’s adjusted just fine to it,” she says. “I think he likes it better than the old house because it's a little simpler for him to navigate.”

And even at 14, Floyd can still find the important things. “He can always find the treat cupboard. He’ll still try to do all his tricks and then walk over to the treat cupboard,” she says. He also still recognizes old friends as soon as they talk to him: “People he knows, he can hardly contain himself.”

The most important thing Vaughn learned: “My dog is much more resilient than I would have thought.”

And according to Stiles, that experience is typical of her clients.

“Don’t feel like it’s the end of the dog’s life or the end of happiness for that dog,” she says. “I’ll see the same dog months later, and they’ll tell me how well the dog is doing.I hear that over and over again.”