Home ›
Our Pet Experts ›
Dr. Patty Khuly ›
What Would You Do If Your Pet Hurt Your Vet?

What Would You Do If Your Pet Hurt Your Vet? 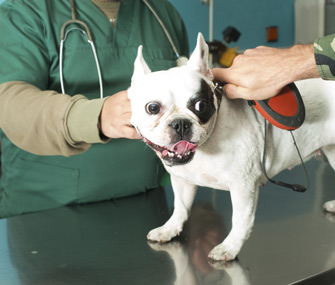 Being a small animal veterinarian may seem like a fairly cushy proposition compared to working with the big ’uns: Horses can kill you with a kick. Llamas can upend you with a flick. Some birds will bite your finger clean off. And a well-motivated monkey can leave you with disfiguring lacerations. So, by comparison, working with dogs and cats would seem like a breeze, right?

Normally, I’d have to agree. Indeed, until October of this year, the last decade had proved fairly uneventful in the injury department: A few deep claw marks, one uncomplicated puncture, and a couple of wayward fang-bangs are pretty much what I expect from this profession on an annual basis. (Sure, it’s tough on the knees and back too, but who’s counting?) In any case, I consider myself lucky to do what I do and remain relatively unscathed.

An Uptick in Injuries

But these past two months haven’t been so humdrum. (And I’m not just talking about the ringworm lesions I still bear on three separate anatomical locations.)

Here’s what happened: Not only did Paco the overly protective Dachshund bite my finger, leaving a deep fang mark and a fingernail-disfiguring bruise, Grotto the 140-pound Rottweiler head-butted me with the kind of force only a half-sedated, scared-out-of-his-skull dog his size can muster, flattening my nose in the process.

Both scenarios were bad enough for me. Attempting to keep my composure as best I could, I backed out of the room in silence. (OK, so I think I might’ve muttered something about having to go to the hospital in one of the two instances, but it’s all a bit muddled by my pain-addled memory.)

As much pain as I might’ve felt, however, there’s no doubt my clients were feeling an equivalent degree of mortification. Both owners held their heads in their hands as I tried my best to console them: “Don’t worry,” I explained, "this is all part of my job.”

No One's to Blame

And it’s true! Sure, it sucks to get clawed, bitten, head-butted, toppled, or injured in any sort of way by your patients, but here’s the thing: It’s never their fault!

In an animal hospital setting pets will act out. Not all of them, of course, but a sizable-enough percentage to make any aggressive behavior directed at the veterinarian or staff members an expected part of almost every human-animal interaction that occurs in a vet office. And since most aggressive behavior in vet settings is fear-based, that makes it even easier to forgive. I mean, what pet wouldn’t be scared?