Home ›
Our Pet Experts ›
Linda Lombardi ›
What's Not to Love About Bats?

What's Not to Love About Bats? 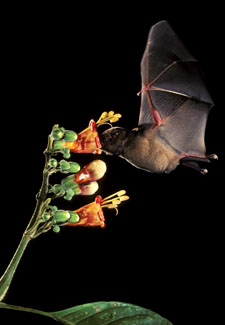 Photo by © Merlin D. Tuttle, Bat Conservation International, batcon.org
Bats are important pollinators and can be thanked for pollinating avocados and the agave found in tequila imported from Mexico.

You may only think about bats when they show up in Halloween decorations. But all year round, bats are important parts of ecosystems all over the world. With the help of Dianne Odegard, public information and training coordinator of Bat Conservation International, we've collected some interesting tidbits about these often misunderstood animals.

Bats are not flying mice! They are mammals, but they are not rodents. Unlike most small mammals, bats reproduce slowly — the females of most species have only one young per year. And bats live a long time: The record for an insect-eating bat in the wild is 41 years.

Some bats can "see" in the dark with their ears using echolocation: They make high-frequency squeaks and listen for the echoes that bounce back from objects. They can then use those echoes to locate an object as fine as a human hair.

Bats are not blind! In fact, many bat species have excellent vision along with their echolocation abilities, and some fruit bats, which do not echolocate, even see in color.

There are more than 1,300 species of bats. One, the hog-nosed bat in Thailand, is believed by many scientists to be the smallest living mammal in the world. Weighing in at less than 2 grams, its body is about the size of a large bumblebee. The largest bat, the giant flying fox — so called because of its long, pointed snout and large eyes — has a wingspan of up to 6 feet.

Bats' bodies are specially adapted for hanging upside down. Their knees face backward, and they have special tendons that keep their toes holding on to a perch, locking them in place using the bat's own weight. They actually need to flex their muscles to let go rather than to hold on. 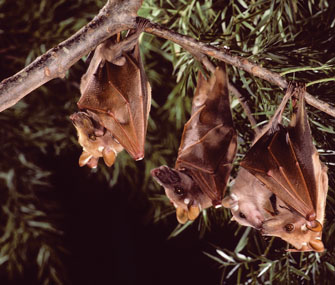 Bats are important pollinators. If you've eaten Mexican food lately, thank a bat — nectar-eating bats pollinated the avocados in your guacamole and the agave for the tequila in your margarita.

Bats are important predators of insects: One small brown bat can eat as many as 1,000 small insects in an hour. Scientists estimate that bats save U.S. farmers at least $3.7 billion a year by eating insects that can damage crops and reducing the amount of pesticides that would otherwise be used.

Fruit bats are important to the ecosystem because they disperse seeds, particularly in clear-cut areas that other animals are reluctant to enter.