Home ›
Our Pet Experts ›
What’s Your Dog Really Thinking? Science Is One Step Closer to the Answer

What’s Your Dog Really Thinking? Science Is One Step Closer to the Answer 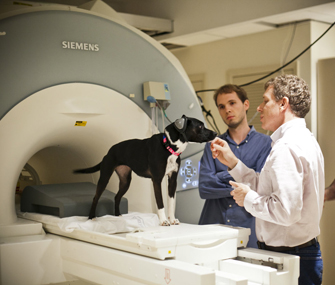 It’s the million-dollar question for anyone who owns a pet: What’s your dog really thinking? Thanks to a feat never before performed by scientists, a team of researchers at Emory University has completed the first in a planned series of experiments to dive deeper into canine gray matter — and the relationship between humans and their pets.

How’d they do it? By wiring two dogs to a functional Magnetic Resonance Imaging (fMRI) machine, the same type used to map the workings of the human brain.

“This experiment was a proof of concept,” says Dr. Gregory Berns, M.D., Ph.D., director of the Center for Neuropolicy at Emory University, who led the experiment. “Nobody had ever accomplished doing an MRI, or even a functional MRI, on a completely awake, unrestrained dog.”

He’s quick to point out that no animals were harmed in the process of the experiment. In fact, one of the two dogs tested, Callie, a Feist hunting dog he adopted from a shelter, was his own.

Vetstreet sat down with Dr. Berns to pick his brain about what he learned about dogs’ wiring — and where research on the human-dog bond is headed.

You’ve come one step closer to answering the question: What is a dog thinking while looking at his owner? Why didn’t anyone try this sooner?

A. Dr. Berns: "The reason no one ever attempted this before is that everyone previously thought the dog was going to move too much [in the machine]. We hit on the idea that that’s not necessarily true, so let’s see if we can train some dogs to hold their heads perfectly still to get perfectly fine MRI images.

Then, once we were sure we could get that, we started asking reasonable scientific questions that were really simple. We used two hand signals — one indicated to the dog that he was going to get a hot dog treat, the other was to get no treat."

What did you expect to find in terms of brain activity?

A. "We already know a great deal about how the reward system of humans works, which is pretty much how it works in all animals. We knew it should be located in the brain, and we wanted to work out the details of how it does work — and quiet the critics who say that you can’t make a dog do that. We’re now at a stage where we can ask more complicated questions about the dog-human relationship."