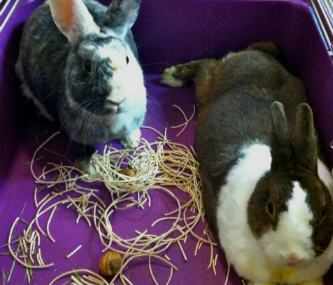 Harrigan is desperate for attention again, persistently head-butting my leg as I sit on the floor, while also trying to get through the Sunday paper. When he doesn’t get what he wants, he climbs up into my lap and digs at my sweatshirt with his paws to better get his message across. Meanwhile, Harrigan’s partner in household crime, Caramel, is energetically patrolling the perimeter of the kitchen. She pauses in front of the sliding glass door to glare at the sparrows out on the deck, before returning to her part-time hobby: deconstructing a cardboard box that I’ve been meaning to recycle for ages.

Contrary to what you may have assumed, Harrigan is not a cat and Caramel is not a dog. They are both indoor house rabbits — hoppy little pets with big, big personalities.

Harrigan, a neutered male Dutch, is the more chilled-out of the two, preferring to spend his free-range hours seeking affection from humans or sitting in the shoe rack. Caramel, a spayed female harlequin, is bossy, restless and always getting into trouble for chewing things. When she’s told “no!” about something, she often thumps her back foot on the floor and runs off in the other direction.

One of the biggest general misconceptions about rabbits is that they just sit there in the cage gnawing on stuff — like great, big hamsters — and don’t do anything interesting all day.

But, as veterinarians, rabbit advocates and the ASPCA advise, rabbits shouldn’t be cooped up in a cage all of the time, because they are active animals who need to run, jump and play. (They can even be litterbox-trained.) It was during one of these out-of-cage experiences that I first got to know my rabbits, discovering that they had very different temperaments in the process.

“People tend to think of rabbits as all one personality,” says Mary E. Cotter, Ed.D, who runs the New York City–area chapter of the House Rabbit Society (HRS) and serves as the vice president for the international HRS organization. The group rescues rabbits and provides education to new or prospective bunny owners. “Rabbits are as distinct from one another as dog or cats,” she says. 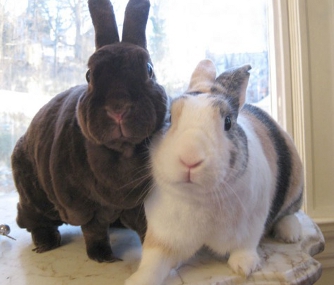 “Admittedly, I was one of those people who thought rabbits were bereft of personality,” says Shaun T. Gorman, an engineering consultant who’s been living with house rabbits for about seven years. “I figured that as animals of prey, their short life spans short-circuited any hereditary ‘personality’ traits and left them with a pretty basic eat-sleep-poop-survive life structure.” He continues, “Ahh, I know differently now — they are little people, with huge ears and lots of body hair.”

Gorman and his wife, Ilona Fabian, a print production artist, have two rabbits: Vienna, a female chocolate Rex, and Punch, a male harlequin Dutch. “Vienna needed a new bunny friend after her bonded partner Stretchy Pete, a brown English Spot, passed away when he was10 years old,” says Fabian. “We took her to a farm with several rabbits to let her find her new buddy herself, and she picked Punch.”