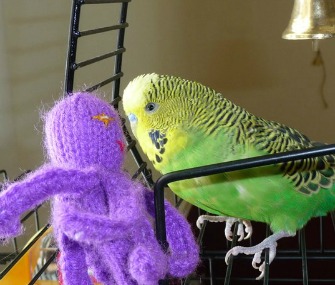 When Judy Bolton jokingly told her husband she was going to teach their new pet parakeet to talk, she thought the little yellow and green bird might learn a few easy words. She never expected Disco would learn over 80 phrases, song lyrics and sounds and become an Internet sensation in the process.

“The joke’s on us!” Bolton says. “We had no idea he’d really talk and certainly no idea he could talk like this!”

Who's a Pretty Bird?

The Boltons, who live in Rochester, N.Y., considered several kinds of birds before deciding on a budgerigar (Melopsittacus undulatus), known as a "budgie" in many countries and commonly called a “parakeet” in the United States. (There’s often confusion about the bird’s proper name because there are a variety of other birds in the parakeet family.)

After they brought 4-month-old Disco home, Judy, her husband, Kevin, and their daughter agreed they’d take a crack at teaching their bird to talk.

Disco was a quick study. Within three weeks, he was saying, “Pretty bird.” Soon, Bolton says, he was mimicking phrases, songs and sound effects.

“What seems to be the problem, officer?” Disco asks in one of his favorite ramblings. “I am not a crook. My name is Disco. I’m a parakeet!”

Disco also likes to jam to his own version of the Flintstones theme song (“Disco, meet the Disco, he’s a yabba dabba doo bird, a dabba doo bird … ”), croon to the Rolling Stones and even rap a bit, Vanilla Ice-style. “Bird to your mother,” he chirps happily.

Once they discovered their budgie’s talent, the family realized how much fun they could have with it, evidenced by signature Disco phrases like “Nobody puts baby bird in the corner!” and “Ooh la la, give me a biiiig kiss [kiss noise]!” Disco meows like a cat, barks like a dog and snores. He even knows a little Spanish: “Hasta la vista, baby bird!”

It’s common for budgies to mimic sounds and say a few choice words, but Disco’s extensive vocabulary and clarity is unusual. “He obviously enjoys it so much, so we keep it up,” Bolton says.

While Bolton does most of the teaching, sometimes her husband gets in on the fun. “He taught Disco ‘I Can Haz Cheezburger’ behind my back,” she says with a laugh.