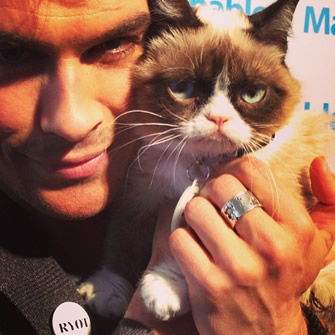 What you see here, folks, is an epic battle that's sure to go down in history. Just remember, you saw it here first. On the right, of course, we have the always adorable Tardar Sauce, better known as Grumpy Cat. She apparently flew first class to SXSW, according to Cele|bitchy, and has gained legions of new fans, including The Vampire Diaries' Ian Somerhalder, who posted his picture with Tard to Instagram with the caption, "Me and my new love..."

But let's be real. As lovey dovey as the two appear to be, you know they were both vying to be the cutest face in Austin. Which one would get your vote? We have to admit, it's a tough call to make!