Why Bulldogs Are Just Too Much 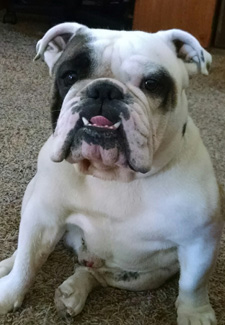 Clyde is a 2-year-old Bulldog whose owner says he "makes everyone laugh, every day, by just being his cute little self."

We are always showing love to our favorite dogs, and we realized it's about time we give a shoutout to one of the more amusing, friendly breeds out there: the Bulldog! Here are five reasons Bulldogs are just too much.

1. Their underbite. This quintessential Bulldog characteristic makes them irresistible to dog lovers everywhere. It's almost as if they're trying to look serious, but instead they just look hilarious. And don't even get us started on those jowls. They're irresistible.

2. Their extroverted personality. Wherever you and your Bulldog go, get ready to meet new people. Known for his typically easygoing demeanor, the Bulldog was originally bred to fight bulls for sport. It's hard to believe, but those who love Bulldogs will tell you that the breed has retained the tenacity and headstrong nature of its ancestors. Most Bulldogs love spending time with their humans, and they can be amiable, tolerant companions for children.

3. Those wrinkles. Is there any cuter feature to the Bulldog than that wrinkly mug? It's hard not to fall in love with that face. Keep in mind, though, that those wrinkles require care. You need to keep your Bulldog's skin folds clean of food and moisture so bacteria doesn't grow there. Make sure you wipe out the wrinkles and always dry them with a cloth. 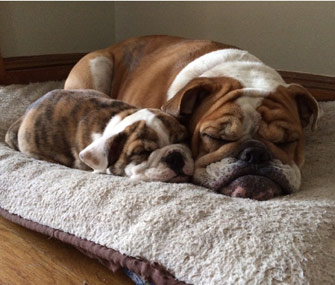 Twice the Bulldogs = twice the snoring. Molly and Gus love to cuddle when they sleep.

4. That snoring. Is that construction we hear down the block? No, that's just a Bulldog snoring. (For evidence, we present this video as exhibit A.) You may realize that your Bulldog can't sleep in the room with you (too noisy!), but you may not know that the breed snores because of its unique head structure — Bulldogs have flatter faces than most other dog breeds and abnormal upper airways. When you ban your Bulldog from your bed, make sure his sleeping area is cool and well-ventilated (he can overheat easily). And talk with your veterinarian if you have concerns about your Bulldog's breathing.

5. Their high-profile connections. Let's be real here: Tillman the Bulldog plays more sports than the average human. He's famous for skateboarding, but his devoted fans will remind you that he can skate, skimboard and surf, too. Bulldogs are also beloved mascots of sports teams at the University of Georgia, Georgetown University, Mississippi State University and Yale University (just to name a few). And their popularity doesn't end there: Bulldogs have won over the hearts of celebrities like Michael Phelps, Jon Hamm, Chris Brown, Joe Jonas and Emma Stone.

What do you love about Bulldogs? Share it with us in the comments below.