Why Cats Are the Best Alarm Clocks 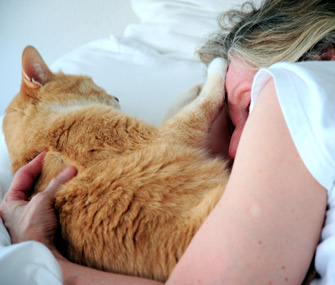 Alamy
The Paw Bop maneuver is a very effective way to wake up humans.

Many humans believe that breakfast is the most important meal of the day, and it appears that many cats agree. Why else would they unabashedly go to such lengths to wake us up early, if not to encourage us to begin preparing their morning meal? And, let's face it: We all know that cats make the best alarm clocks.

If your cat is an early riser who clearly wants you to be one, as well, you’re not alone. Here's our humorous take on some of the more popular strategies cats use to keep us from sleeping in. Do any of these tongue-in-cheek examples sound familiar?

The head nuzzle is a highly manipulative move because it can also masquerade as a cat showing affection. Cats know their humans crave feline loving. In this wake-up strategy, the cat gently pushes his head against the human’s face and purrs loudly. There are several variations on this theme: The cat can push his head against the human’s neck and nose, as well. The key here is the cat’s seemingly affectionate purring, which makes it hard for the human to be upset that she's been roused from sleep. Who can resist a nuzzling, purring cat? No one we know!

This wake-up strategy is direct and to the point. The cat stands on the human’s chest, making himself as heavy as possible (how do they do that?) and meows incessantly until the human awakes. Cats use this when they believe they are close to starving to death (even though those of us who can tell time know better) and there is no time to be cute or pussyfoot around. 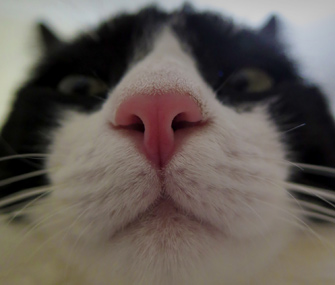 Thinkstock
Nothing says "good morning" like waking up to a cat's superintense stare.

This move is much more subtle than the Chest Meow tactic. Cats use this when they have a bit of time, aren’t feeling super energetic or simply want to exercise their mind control skills. In this strategy, the cat sits on the human’s chest in a meatloaf-like position and stares at the human while she sleeps. This requires patience and trust in the process. It will work, however, and deliver the added benefit of creeping out the human just a bit, as she wonders just how long the cat has been sitting therestaring at her.

The Face Tickle comes in many varieties and is one of the most effective strategies available to the feline kind. There is no way a human can sleep through the Face Tickle. This tactic involves the cat sticking his face into the human’s face, ears or neck and breathing hot cat breath on the human, while brushing his whiskers against the sleeping human’s face. Some cats add a wet nose tap or snuffle, if the results aren’t happening fast enough for her liking. This strategy is also sometimes called “Morning Invasion of Personal Space.”

Some cats prefer basic, no-frills strategies that simply involve a cat paw and a human face. Pawing at a human face is a highly effective move and can also be quite fun for the cat. Bopping the human directly on her nose is a particularly entertaining component and may indeed make the human laugh, as well, thus rendering her defenseless against the Paw Bop.

Cats are highly intelligent creatures in many ways and getting us to say bonjour to breakfast a little earlier than we’d like is one of them. Remember, there is no snooze button on a cat who wants breakfast!

But, never fear, dear sleep deprived humans! If your favorite feline's antics are truly bothersome, there are ways to help prevent your cat from waking you up, including, yes, simply shutting the bedroom door.

What strategies does your cat use to wake you up? Tell us in the comments below.