Home ›
Our Pet Experts ›
Linda Lombardi ›
Why Does My Bird... Bite Me? 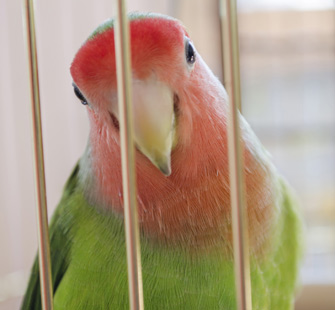 Whether your bird occasionally nips your finger or flat-out chomps you like he’s auditioning for a remake of Alfred Hitchcock’s The Birds, his bites may not always be what they seem, according to Laurie Hess, DVM, DABVP, owner of Veterinary Center for Birds & Exotics in Bedford Hills, New York. Dr. Hess notes that biting is the top bird behavior problem she hears about.

While some birds can bite out of anger, more often the bird is using his beak out of fear. “It’s just the bird telling you he may not want to do what you want him to do, and biting is one of the few ways he has to communicate that,” says Dr. Hess. “He can’t really do much else.”

Sometimes your feathery friend is not trying to bite you at all, but is simply using his beak as an appendage to climb or hold on to something or someone. When a bird pulls himself up onto a perch, he leans forward and uses his beak to grab hold and then pulls his feet toward the beak, Dr. Hess explains. “This actually happened to me on a national television show where the bird reached out for a woman’s arm,” she says, “and she thought the bird was biting her — but actually he was just pulling himself up!”

And since birds are oral creatures, says Dr. Hess, sometimes they’ll nibble and try things, but it doesn’t mean that the bird is trying to do anything hurtful.

Even when a bird is mislabeled as aggressive or angry when he’s really just afraid, the bite hurts just as much and can affect the happiness of the home. Luckily there are ways to lessen biting behavior. Dr. Hess recommends learning your bird’s body language and what it means, so when your bird gives you a sign that he’s not ready to come out of his cage, for example, you can give him some extra time.

Dr. Hess suggests giving the bird something better than it gets from biting you. Biting, like other behaviors, is done either to get something good or to avoid something bad, and will persist if it is reinforced — until a more attractive alternative is introduced. She uses her own bird, Dale, as an example of how receiving a special treat is more appealing to the bird than having his owner leave him alone when she gets home. “If I go to Dale’s cage as soon as I come home from work, and he is all hyped up that I’m home, and I open the door of the cage and he bites my hand and I back off,” says Dr. Hess, “then he’s going to continue to bite my hand because he knows that I’m going to go away.” However, if Dr. Hess comes to Dale’s cage armed with an almond, “and I ask the bird to step up on my hand and he gets an almond — which he loves and never gets at any other time,” she says, “then he’s going to know, ‘If I step on the hand, I get an almond.’ And that’s really worth stepping on the hand for.“