Why Does My Cat... Scare Big Dogs? 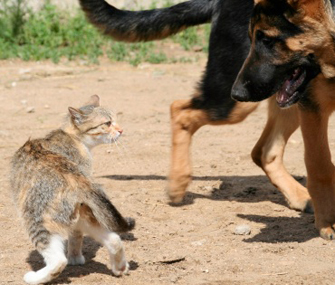 Your cat may be small, but even a little cat can be truly alarming.

Ask any small animal veterinarian and he’ll likely agree: There are few things in his practice quite as impressively fearsome as a motivated cat — which is probably what all those large dog breeds are thinking when they hear your cat spit, hiss or shriek at them. After all, there are sharp teeth and claws attached.

Dogs who were not socialized with cats within the first few months of their lives typically fall into one of two categories: those who chase or attack cats and those who allow themselves to be cowed by them. However, a dog's fear has a lot to do with the cat, too. Some cats are so confident in their abilities to stare down a dog, they dominate any dog-cat interaction.

But be warned: Even the fiercest of felines can lose to a terrifically excited dog who’s significantly bigger. Best not test those waters too often, lest kitty meet the one big dog who thinks he looks more like lunch than something to be feared.