Why Does My Cat... Steal Things? 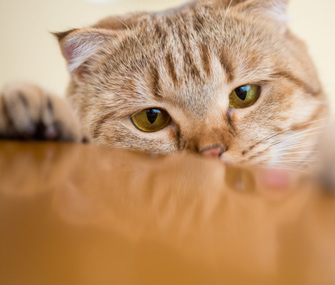 Alamy
Your cat might steal items because she wants your attention, wants to play or wants the forbidden object.

When people say their pets have stolen items from them, most everyone thinks that those people are talking about dogs. However, cats also have been known to move or remove items around the house. There may be various motivations for a cat to “steal.”

1. I Want Your Attention

Your cat may have learned that when she takes certain items, such as pens, pieces of paper, plastic bottle caps, hair ties, shoelaces, etc., that you give her attention. When your cat wants to interact with you and you do not give her attention, taking an item that you are concerned about is one good way to get you to focus on her. Even though you may give your cat a verbal reprimand, what we may consider negative attention is still "good" attention to her. It is the same as the student who acts up in class to get the teacher’s or classmates’ attention. Most often, in these cases, owners move toward the cat. The cat then learns to enjoy being “chased” by her owner. She learns that when she grabs that item, the owner engages in a fun bout of catch-me-if-you-can.

Most often, a cat takes small items that she wants to bat around or manipulate with her paws. Sometimes cats are attracted to the appearance or texture of an item. The item is displaced simply because the cat moves it around. The displacement of the item may make it appear like the cat has "stolen" an object, but she has merely used it for a fun activity. Sometimes these items do get lost under furniture or in an area where the cat cannot reach. I had one owner report to me that she moved her couch away from the wall and found 30 hair ties. She kept buying them because she would lose them. She didn't suspect that her cat was taking them because she never saw the cat play with them when she was home. Sometimes, cats will leave the "stolen" items in areas where they spend the majority of their time, such as the bed.

3. I Want That Forbidden Fruit

In this scenario, a cat takes items stealthily because she does not want the owner to know. She does not want the owner’s attention because she has learned from past experiences that when she is caught with a certain item, the item gets taken away and/or she is reprimanded. What items would be considered contraband to a cat? If your cat has a propensity to eat and swallow items, it is very important to keep her away from potentially dangerous items she is attracted to. Most cats tend to chew on stringlike objects, such as shoelaces or string toys, hair ties, and certain materials such as wool or fleece. The goal for the cat is to remove the item from the owner’s sight so that she can play with it or, in some cases, chew or eat the item. I had a cat who had a tendency to chew and eat the fingertips off my leather gloves. Luckily for me, he vomited the leather pieces up. Otherwise, if the pieces had obstructed his intestine, he would have required surgery to remove them. After two pairs of gloves were ruined, I started keeping them out of his reach. Whenever I forgot to put them away, even for the briefest moment, he would try to grab the gloves and run away with them.

Some of these problems can be resolved or improved upon by providing adequate playtime and giving your cat individual attention, such as talking to or petting her. Also try puzzle toysto haveyour cat work for a portion of her food. This will help keep your cat mentally and physically engaged and less likely to have the free time to devote to undesirable behavior, like being a cat burglar!

As always, if you need additional help or are concerned that your cat’s "stealing" could be affecting her health, consult a veterinarian or animal behavior professional.