Home ›
Our Pet Experts ›
Dr. Wailani Sung ›
Why Good Dogs Bite — Part II: You Just Got in the Way

Why Good Dogs Bite — Part II: You Just Got in the Way 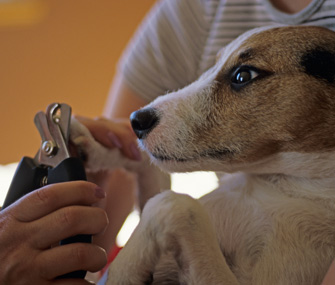 Alamy
Pay attention to your dog's body language while you trim his nails. If he seems stressed or anxious, stop what you're doing.

Recently, I’ve written a couple of articles about dog bites. In one, I wrote about what to do in case your dog bites you. In another, "Why Good Dogs Bite Part I: You Didn’t Hear What He Was Saying," I wrote about all the ways that we as well-meaning owners can misread signs that our dogs may be feeling threatened or uncomfortable and how these situations can lead to a bite.

In this article, I’ll take a look at some of the scenarios where bites occur, because we as owners may unwittingly “get in the way.” I’ll also try to give some tips on how you can avoid these situations. The purpose of these articles is to prevent bites. If your dog is already exhibiting aggressive behavior,such as lunging, snapping or biting, then you need to obtain professional help right away. It is also always a good idea to consult your veterinarian to rule out the possibility that an underlying physical problem may be contributing to your dog’s behavior.

One common “in the way” situation is when your dog becomes super excited by some other activity that is occurring. When dogs are in a heightened state of emotional arousal, such as when at play or being territorial, they sometimes may lose their inhibitions and bite whoever is closest to them.

When the bite occurs during play, it is labeled "play aggression." In this scenario, you need to stop playing with your dog before he starts to nip or bite. Just like children who become overly excitable and lose control during high-energy play, sometimes you need to recognize that things are getting a little too crazy with your dog, take a break mid-play and allow him to calm down.


When Aggression Is Redirected

In situations where your dog is reacting toward another dog or person and cannot reach that dog/person, he may direct his aggressive behavior toward the closest warm body around — which may be you! In a normal, calm state, your dog would not typically exhibit aggressive behavior toward you. However, in this scenario, you are not the cause of your dog’s redirected aggression, but you can become an unwitting target. In these kinds of cases, you as the owner must be aware of the triggers for this aggressive behavior in your dog and avoid exposing him to them. Here’s one example of how you can address this: I once had a dog who ran along the fence barking at people and other dogs that walked past the yard. When I approached him and tried to reach for his collar, he would try to snap at me to keep me away from him. Except for when he was exhibiting this territorial behavior, I could approach him any other time. This is how I addressed the situation: When there was no one walking past the fence, I worked on teaching my dog to come inside the house for a tasty treat or his favorite toy. We practiced this until he immediately responded to my cues. It did not stop my dog from barking at people walking past the fence — because that was a totally different exercise — but I was able to get his attention and redirect him to an alternative behavior before the situation escalated out of control.

If an owner inserts himself in a situation in which two dogs are fighting, there is an increased risk of injury to the person when he tries to reach in to grab a dog’s collar or anywhere on the front half of the dog’s body. Avoid doing this. Safer ways to separate two fighting dogs are to employ a citronella deterrent spray or water from a garden hose to break up the fight; throw a jacket or sweatshirt over the dogs or toss a backpack between them if you can; or using a loud noise, such as banging two pots together, to distract the dogs. Once the dogs are distracted, maneuver your dog out of sight and away from the other dog.