Why I Cringe When People Buy Teacup Pigs 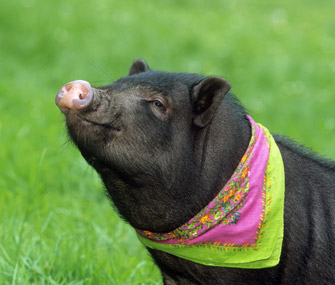 Go ahead, Google it.

When you do, your search for “teacup pigs” will produce the following results: “We specialize in cute, happy and healthy miniature pigs, micro-mini pigs and Juliana pigs!”

Scroll down a bit and images of piglets nestled within mugs and other random bits of pottery appear alongside such slogans as “We have some of the smallest teacup pigs in the world!”

All of this mostly makes me want to throw up.

I know it sounds harsh, but here’s just a smattering of the reasons why the concept of a teacup pig turns my stomach:

Also referred to as “dandie pigs,” “mini potbelly pigs” and “pocket pigs,” these teacups have become increasingly fashionable over the past decade.

Enter celebutante Paris Hilton, whose penchant for accessorizing with pets took a detour toward the porcine with her purchase of a tiny piglet in 2010.

Here’s what she told Hello magazine back then: “I went online and found these tiny teacup pigs that stay under 12 pounds when they’re fully grown. They’re incredibly smart, lovable, really clean and litter trained.”

And here’s a photo of Paris with her “ultra teacup royal dandie piglet” in 2010.

All of this, of course, added kindling to the concept of impulse pig purchases and sourcing animals sight unseen online — neither of which is a recommendable practice.

Whether we’re talking about teacup pigs or Pugs, I simply can’t stand the appellation. What’s so compelling about an animal who fits inside a teacup?

Just as with dogs, the word “teacup” purports to describe the size of a pig for marketing purposes alone. It is not a distinct species or breed of pig. It’s just a pig who’s been bred to be smaller than most.

The True Story About Size

Forget what Paris said — 12 pounds is not what these pigs weigh when fully grown. Try 40 or 50, if you’re lucky. Many of these pigs will weigh well over 100 pounds once they reach their maximum poundage — at which point they’re often surrendered to a rescue.

By way of illustration, here’s Paris with her 50-pound teacup pig in 2011.