Why Imported Dogs Could Hurt Your Health 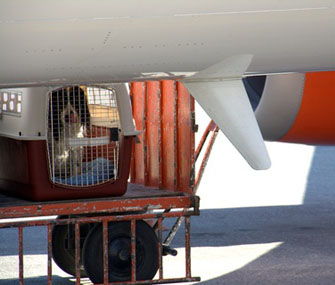 It’s a disturbing trend that’s taken off in the past decade: The importation of puppies from overseas, such as Bulldog breeds and other high-priced pedigrees. People snap them up via “breeders” and pet shops alike, all while thinking there’s some kind of cachet to buying a Romanian-born French Bulldog.

Little do they know (or so we can only hope) that these pups are a) ill-bred relatives to the breed standard (they look and act less like the breed you think you’re buying) and b) more likely to suffer genetic diseases than their non-puppy mill, breeder-raised U.S. counterparts.

At last count — the most recent year for which statistics were recorded is 2006 — 287,000 such dogs entered the United States. Considering the seemingly bottomless consumer demand for purebred and crossbred puppies (aka "designer breeds"), along with the impact of our increasingly strict breeding laws, experts believe this stat has likely been dwarfed by 2011’s pup imports.

This may not be such a bad thing, you may be thinking. Anything’s better than an American puppy mill, right? Well, not necessarily. Puppy mills may be horrific, with inexcusably deficient conditions for the poor dogs who live there, but at least they’re regulated by the USDA. In the Ukraine? Not so much.

In fact, it’s a widely held belief among animal welfare advocates that certain breeds hail from Eastern Europe for a reason: The region is sophisticated enough to know how to produce notoriously difficult-to-breed dogs in bulk (like French Bulldogs), but it’s also unregulated enough that it can do so cheaply. That translates into sight-unseen puppy mill conditions at best.

In South Florida, where I live, I guesstimate that more than 50 percent of the French Bulldog and French Bulldog crosses (yes, the “hybrids” are also popular here) are imported from Romania or the Ukraine –– where it must cost next to nothing to C-section a bitch, driving production costs way down relative to U.S.-bred cousins.

It’s no secret that most of the middlemen in this new import game are puppy millers and less-than-scrupulous puppy retailers. As conditions for commercial breeders (aka puppy millers) get tougher in the United States, meeting the demand for purebreds means outsourcing pup production. So it is that, upon arrival, these pups don’t meet the loving arms of new owners — and they arrive in crates by the dozens.

This brings me to the transport issue:   The pups are arriving as 4- to 6-weekers via cargo — I've seen some terribly young ones in my office as firsthand evidence — hence the sky-high morbidity and mortality rates in these pups in the days postarrival. And these are the ones who actually make it. We don’t even have a handle on how many pups die in transport, because no one is required to keep track of them for international flights (by contrast, domestic flights must record mortality stats).

But the welfare issues inherent to importation are just one side of the coin. The other is the threat of infectious disease: Based on trends suggesting that the annual number of unvaccinated puppies being imported into the United States increased impressively from 2001 to 2006, it becomes glaringly obvious that these dogs pose a risk for introducing diseases into our country. There are some scary bugs out there. Bugs that haven't seen our soil for decades, thanks to better health screenings of more traditional agricultural species, like hogs and cattle. Unfortunately, the concept of the dog as an agricultural species is still novel enough that we don't properly track their numbers at our borders.

Indeed, the U.S. government has no real way of tracking exactly how many dogs are brought into the country, where they come from, where they're going or whether importers are following vaccination requirements for underage puppies. And the U.S. Customs and Border Protection agency has historically been the only one responsible for ensuring that all imported animals meet federal agency requirements. Yet there’s no protocol set up for them to do much of anything in these cases.

The fact that there's a huge loophole in our war on poor animal welfare is one thing, but the yawning gap in our nation's biological defenses is quite another.   This is why federal regulators — who are so new to the problem that they lack the capacity to handle this burgeoning breed of animal importation — have been asking, “So what are we supposed to do?”

Predictably, the Centers for Disease Control and Prevention has become increasingly alarmed over the problem. It’s a serious biosecurity threat, after all. It’s probably why the USDA’s Animal and Plant Health Inspection Service has recently proposed restricting the importation of dogs into the United States for research, resale or veterinary treatment to dogs who are older than 6 months, vaccinated and in good health, with the possibility of a waiver for sick animals who may legitimately require veterinary care.

This, of course, puts a damper on purebred pup imports. In the past, I’ve suggested that we consider treating dogs like any other kind of agricultural import. Cold as that sounds, it happens to kill two birds with one stone: Not only does it help restrict the entry of potentially disastrous infectious diseases into the United States that can harm even humans, but it also addresses serious animal welfare issues.

And if it means fewer French Bulldogs on the market? I can live with that. Can you?