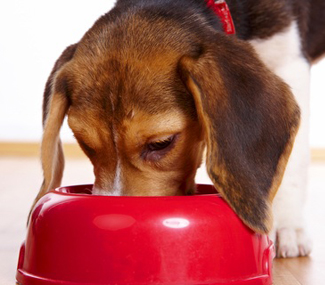 “But she eats almost nothing!”

So begins the conversation I’ve just initiated with a client by not-so-innocently pointing to Bella’s burgeoning backside. Her extreme roundness means there’s little doubt about what I’m referring to — especially when I mime a Buddha belly for her.

Note: I’ve still not said a word, but the owner is already presenting a defense for her Beagle’s ample derriere. Not that I blame her. I’d also be defensive if my dog was 50 percent overweight, which is why I try to inject some humor into the situation with my Marcel Marceau act.

In this case, it’s working, seeing as my client isn’t upset or angry — just a tad flustered and only slightly embarrassed. And this is exactly what I’m going for. Owners of obese pets almost always know their dogs are fat, so rubbing their noses in it doesn’t help. What does help is getting them to talk about the situation, so I can figure out where the problem lies.

As with so many others, the volume of food given to Bella is an overriding issue. When the owner says that her dog "eats almost nothing," she holds up her hand and makes a letter “C” with it, thereby indicating a highly nonspecific measure of kibble that lands in Bella’s bowl.

Little does Bella’s owner know that “C is for cookie” is one of the most common defenses known to veterinarians. It's so prevalent that the cliché of the five-kibble-a-day-eating beagle would be hysterically funny — if it weren’t so sad. Let’s be honest here: It should be obvious that Bella is eating too much, however much that is.

But here’s where my take on the subject may surprise you: Owners like Bella’s can be somewhat forgiven for overfeeding their dogs, while irrationally worrying that they’re not feeding them enough. After all, they’ve been trained to think their pets need more food than they actually do.

As much as I believe it should be self-evident when a fat animal needs to eat less, this inconvenient truth is often obscured by modern delivery methods. Let me explain: Since most pet food is delivered either as desiccated morsels or dense patés specifically designed for convenience and affordability, the nutrient content can be deceptive. In other words, pet food tends to be more nutritionally dense than standard human fare — as in, more calories per ounce.

Most dog kibble averages about 300 to 500 calories per cup. Think Snickers bar density. A comparison can also be aptly made to one of those meal-replacing protein bars you might pick up at the gym. Eat three of those bad boys every day and you'd need little else for weight maintenance (optimum nutrition is another matter, of course).

To me, this concept makes perfect sense. But pet owners either don’t know or don’t get it. I know this because the surest way to raise an eyebrow in the exam room is to let my clients in on a little secret: A large Milk Bone brand dog biscuit contains a whopping 325 calories within its toothsome crust. That's more than what is in a cup of some common dog foods. Crazy, right?

It all goes back to the same concept: Pet food is denser than so-called “people food," which is why you need to feed pets less than your people food-biased brain is telling you she needs to eat.

Then there’s this annoying issue: What's with the verbiage that passes for gospel on the side of the pet food bag?

That may be an unduly harsh statement, but it’s what most veterinarians are really thinking when we read that a dog roughly Bella’s size (45 pounds) requires a serving size of three cups, twice daily. Never mind that Bella is supposed to weigh 25 to 30 pounds or that she does nothing but sit on a couch all day, instead of trotting briskly for hours at a time (as a dog like her is built to do). It's a widely held veterinary opinion that greater clarity in pet food portion recommendations would undeniably improve the health of animals.

The Responsibility Lies With The Owners

Now back to Bella. You’d think that once I’ve explained all of this, it would be a simple thing to get owners like Bella’s to reform their ways, right? Unfortunately, that’s not always the case.

Some owners are so wedded to the fiction of pet food-people food parity that it’s impossible to get them to stop believing that they’re starving their pets when they’re really feeding them just the right amount. They’d rather convince themselves that it is lack of exercise that’s to blame — and yet do nothing to change that lifestyle.

It certainly doesn’t help that dogs like Bella have spent their entire lives perfecting the art of looking hungry. Of course, you’d think that, at some point, the rolls of fat would convince her owner otherwise. Unfortunately, things often have to take a harsh turn — such as a pet's inability to walk when a cruciate ligament ruptures, — that finally gets an owner to look at the problem seriously.