Home ›
Our Pet Experts ›
Dr. Patty Khuly ›
Why the Wolves of Montana Need Our Help

Why the Wolves of Montana Need Our Help 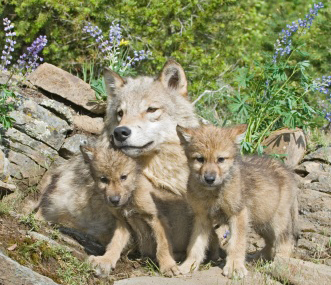 Sometimes it’s not enough to rail against lawmakers. Sometimes you have to write letters, protest and pose legal challenges in the interest of the defenseless. Consider this petition out of Montana that my sister forwarded to me last week:

“Since Congress stripped wolves of protection under the Endangered Species Act earlier this year, Montana has been prodding its people to take up hunting. It’s no secret. In fact, to date, at least 120 wolves have been ‘harvested.’ But this is not enough for the state. Montana is extending its hunting season past the original Dec. 31 limit, through mid-February, to meet its ultimate target: 220 wolves dead. This would reduce the population to 425 wolves — a 25 percent drop.”

The originator of this missive, the Center for Biological Diversity, is currently challenging the government in court to help restore the wolves' federal protection, but any legal solution may not come soon enough for 100 of the state's wolves. This is why the email ended with the following plea: “Contact Montana Governor Brian Schweitzer and ask him to suspend the hunt and let Montana's wolves live."

Defenders of the wolves argue that it’s undeniably indefensible. Sure, the hunting of animals takes place on a wholesale scale across the country. However, with wolves and other seriously threatened species, the argument takes an additional turn with the implementation of the Endangered Species Act.

The problem is that the ESA is a federal law, which tends to favor the total number of wolves nationwide as a metric of species success, rather than the genetic success of smaller, isolated populations like Montana’s. This is why geneticists argue that endangered species status does little to help the 425 wolves of Montana, who are spread out over a vast area, maintain their numbers.

Yet the hunt goes on.

But you don't live here, many Montanans argue. You don’t have to deal with the problems that wolves pose.

As a South Floridian who lives with alligators (they kill dogs and livestock fairly often, along with the occasional human), I think that I can understand the average Montanan’s point of view on the subject. I defend the right of trained and licensed hunters to catch alligators, but only because the population of alligators is well within the “safe” zone. But to kill off 25 percent of a wolf population of less than 500 individuals, that’s genocide.

Just imagine if Montana’s approach was applied to small wolf colonies across the United States. Before long, we’d be forced (yet again) to move wolves around — at great cost — in order to inject new genetic material into ailing packs.

So how about it? Will you write to Montana’s governor? If you’re a defender of wildlife — especially if you’re a Montanan — what are you waiting for?