Home ›
Our Pet Experts ›
Dr. Patty Khuly ›
Why We Should Be Worried About White Nose Syndrome — and the Welfare of Bats 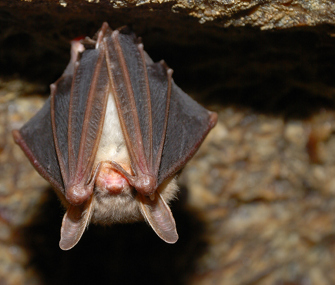 I can understand why people are scared of bats. They’re not unlike flying rats, but that doesn’t mean they deserve a universal diss — especially when you consider how surprisingly central they are to maintaining healthy ecosystems, as well as keeping our food supply on the up and up. Did you know that bats work really hard on behalf of humans every day? For all the vilification that we subject them to, their way around an insect (eating them) is all about keeping humans — like farmers — happy.

The bat penchant for crunchy insect exoskeletons means that plants and animals grow better as a result of the absence of bugs. It also means that humans are less likely to contract insect-borne diseases.

If natural predators like bats are present to kill off pests, even the most superstitious and flying-rodent-phobic among us would be hard-pressed to deny them their due, right?

The problem is that we’ve got something called white nose syndrome (WNS) going around. This oddball start-up of a “fungus among us” has veterinarians really stumped. We may understand how this thing got started and propagated, but we have (as of yet) no idea how to stem the tide of its warpath. Not when mortality rates are up to 100 percent.

Although most organisms tend to lie dormant in the colder winter months, this one has proven to be the exception to the rule. As I write, WNS is flourishing, disorienting bats who cluster near hibernation sites in 16 different states and four Canadian provinces. It's estimated that as many as 6.7 million bats have been lost to this unprecedentedly devastating disease.

So what exactly are we supposed to do?

There’s the rub. Committees, task forces and symposia have all been organized around the issue, and yet no clear recommendations have resulted. We’re all in the dark. So here’s hoping that bats manage to stay that way — consistent with their nature — as humans wage war against the tiny invaders that threaten us all.