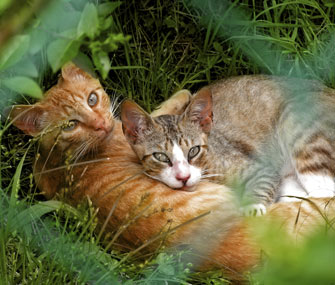 Thinkstock
Feral cats are felines that have never been pets, and most never could be.

Have you ever seen a feral cat or a colony of feral cats? Many people don’t know these cats exist, yet they can be found in virtually every corner of our communities, from suburban developments to downtown areas to rural farmland.

Feral and stray cats, known collectively as "community cats," have been living among humans for thousands of years, and The Humane Society of the United States (HSUS) estimates there may be up to 40 million community cats in neighborhoods across the country.

Advocacy groups work to ensure the safety and humane treatment of community cats through education, caretaking programs and other support.

October 16, 2014, is designated National Feral Cat Day by Alley Cat Allies, an organization dedicated to the protection and humane treatment of cats.

In honor of National Feral Cat Day, we share some things you should know about this nationwide animal welfare issue.

What's the Difference Between Feral and Stray Cats?

Feral cats are outdoor cats who have never been socialized to humans. They have never been pets, and most nevercouldbe. They’re typically fearful of humans and would not be happy living in a home.

Stray cats, however, were once someone’s pet but were either lost or abandoned and now live on the streets. If a stray cat has been away from humans long enough, she can exhibit feral tendencies, but many strays remain friendly to humans.

The kittens of feral cats are born feral, says Alley Cat Allies, but they can be socialized when they are babies and adopted into loving homes.

Where Do Community Cats Live?

Community cats often live in colonies and become closely bonded with their colony members, according to the HSUS. They choose strategic locations, away from danger and with easy access to food, water and shelter. They keep to themselves. In fact, neighbors may not even be aware of a nearby colony, because most of the cats stay out of sight as much as possible.