Why You Should Care About Horseshoe Crabs 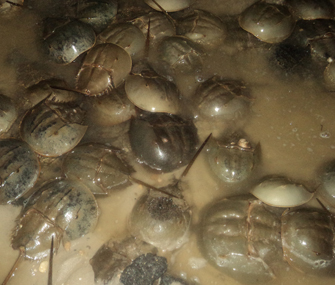 Photo courtesy of the Delaware Center for the Inland Bays
In the spring, horseshoe crabs come ashore in huge numbers to lay eggs. This time of year, you can see thousands of them together.

The spawning of horseshoe crabs is an amazing spectacle — and an opportunity for scientists to keep track of the numbers of the important animals. They've done so since 1990, when a group led by researchers, including Hall, conducted the first horseshoe crab survey with the help of volunteers. The idea of conducting a census had good timing, because soon a new threat appeared: The bait industry started to collect the crabs in huge numbers. "They were coming to the beaches and hauling off tractor-trailer loads of 10,000 at a time," Hall says.

When the census showed the population was declining, a management plan was created regulating the number of animals that could be harvested. Hall says that last year's survey finally gave some indication that the population is recovering. "That's what we figured it would take," he says, "a minimum of 10 years of management for the population to recover, since it takes 10 years for them to mature."

How You Can Get Involved

Vounteers can help with the surveys Hall and Buehl conduct by going to their websites and getting in touch with the team leaders who monitor the beaches to know when the spawning starts.

Buehl says that it's simple to get involved with his group's census. "The training can occur onsite — it's pretty rudimentary. Watch for a few minutes, and you can learn to identify male from female and count," he says. The count takes place after dark, so you're encouraged to wear a headlamp to keep your hands free. If you're not comfortable handling the crabs, you can help tabulate data or lay out the rope that marks where to count or even just observe.

Hall says that his group conducts surveys 12 nights per year in the Delaware Bay and gets a minimum of 150 to 200 volunteers annually, some of whom think it's worth quite a trip to see this natural phenomenon. "People have come from all over," he says. "We've had people come from as far away as California, England and Germany."

Other Ways to Help

If your trips to the beach don't coincide with crab census season, there are other ways to help horseshoe crabs. Scientists tag some crabs, and if you find one, you can report it. "The tags help us to find out where they're going and understand their whole life cycle," Buehl says. "When they go out into deep water and bury themselves in the winter, where do they go? And do we need to be careful about how we're managing those areas?"

Also, if you see a live crab upside down on the beach, flip it over. "If they're left there, they either dry out or the gulls eat them," Hall says. Although the tail is there to flip them back over in these situations, it doesn't always work — for instance, if the sand is too wet for the tail to get a good grip.

And if nothing else, just appreciate this ancient animal that's so unexpectedly important. "Here's something that people see wash up on shore and back away from and think it's going to sting them with its tail," Buehl says, "and most people don't realize they've benefited from something these creatures provide, which is making sure that medications are free from contamination."