Home ›
Our Pet Experts ›
Wine and the Working Dog

Wine and the Working Dog 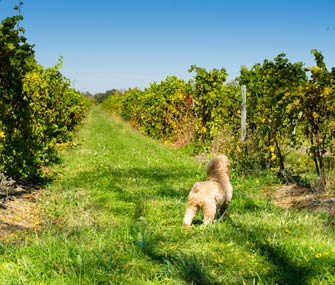 Thinkstock
For these winery mascots, it’s all in a day’s work.

There’s no doubt that dogs are hard workers. Among the more popular canine career holders are service dogs, therapy dogs, herding dogs, and search and rescue dogs. One of the less well-known pup professions is serving as a mascot, yet dogs have represented organizations as mascots for hundreds of years.

Mascots are most commonly associated with colleges and universities, but many national businesses have had famous mascots as well. Think Gidget the Chihuahua from Taco Bell and Bullseye the Bull Terrier from Target.

There is one type of business where you might not expect to see a mascot, however: a winery. In reality, many wineries have 4-legged mascots, and these furry ambassadors are integral to their workplaces. We found some dogs hard at — ahem — work in wineries around the country. If you’re planning a trip this fall, here are some wineries and their mascots you might want to consider checking out.

Zeus is the head dog at Milano Family Winery in Mendocino County, California. A 6-year-old Pomeranian, Zeus has been working at the winery for about 4 years. He arrives every morning ready for business with Deanna Starr, winery owner, winemaker, and Zeus’s “girlfriend.”

According to Deanna, Zeus took to his duties with great enthusiasm from the start of his career. “He is very thorough at overseeing all of the operations and greeting guests,” says Deanna. How does Zeus get along with the winery’s customers? “They love him,” Deanna says. “They ask about Zeus if he is not around. And he is about as cute as they come — he even smiles!”

A Gust Of Sun

Jewell, Cody, and Abbey, a trio of West Highland White Terriers, have been working at A Gust of Sun Winery and Vineyard in Ransomville, New York, since the winery opened its doors in 2011. Ages 13, 11, and 10, respectively, the pups can be found hard at work everyday as the official greeting committee and guest companions at the winery. “People come from all over to visit them,” co-owner Shane Gustafson notes.

Having 3 mascots — with 3 very different personalities — serves guests well. “Jewell fancies herself the princess of the pack,” Shane says, “despite letting her brother Cody have his way most of the time.” While initially appearing sweet and demure, Jewell can actually be quite bold when her spicy personality makes itself known.

Sweet, charming, and intelligent, Cody recognizes many words and performs tricks for winery goers. “You can tell when he’s trying to understand something because of his characteristic head tilt when you speak to him,” Shane says. “He’s also the face licker of the bunch!”

Abbey is the shyest of the pups. Says Shane, “She’s an unpretentious tomboy who loves to play rough with her brother Cody, yet is reserved and cautious in new situations. And she’s always open for snuggles.”

Larry Oates, owner and winemaker at Sleeping Dog Wines in Benton City, Washington, says, “With a name like ours, of course we have a canine figurehead.” The winery’s current ambassador is Jett, a 4-year-old black German Shepherd. “Jett had a fragmented life before we adopted her 2 years ago,” says Larry.

Although Jett’s manners have improved significantly since Larry first brought her home, “it can be trying at times when Jett barks loudly at our visitors,” he says. “Once she settles down and customers get involved in tasting the wines, they become smitten with Jett — just in time to be barked at again as they head to their cars.”