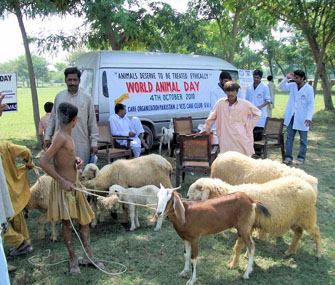 On October 4, World Animal Day will be celebrating its 10th anniversary. Over the past decade, this holiday has acted as a day to remember all animals and the people who care for them, but its origins go back much further than 2003. The first World Animal Day took place in Florence, Italy, in 1931 at a convention of ecologists. They chose this specific day to gather together and highlight the plight of endangered species because it is the feast day of St. Francis of Assisi, the patron saint of animals.

It was a little known event until 10 years ago, when Naturewatch launched a World Animal Day initiative to encourage people everywhere to celebrate every species each October.

“We recognized that many people were reaching out for some kind of umbrella to embrace all animals and the unique concerns of each in every country. Combined, they connect to millions of people, but they needed a central platform, which led to the creation of World Animal Day,” says Caroline Barker, Naturewatch’s World Animal Day campaign manager.

Naturewatch hopes the holiday will connect animal advocates around the world and unite the animal welfare movements in different countries.

“It's the ideal opportunity for everyone who cares about animals to commemorate their love and respect for animals by doing something special to highlight their importance in the world,” Barker says. “Through increased awareness and education, we can help create a new culture of respect and sensitivity, to make this world a fairer place for all living creatures.”

The day doesn’t focus on one animal or one particular problem, but Barker says that over the past decade, they’ve emphasized the lack of acceptable legislation to protect animals and the issues faced by stray dogs the most.

“The ultimate goal of the World Animal Day initiative is to encourage everybody who cares about animals to use this special day to help make animal welfare issues front-page news around the globe — a vital catalyst for change,” she says.