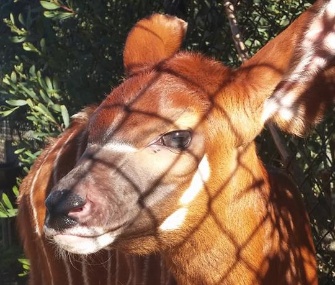 Two rare calves born at the San Francisco Zoo during the San Francisco Giants’ pennant race and the World Series have been named for key players on the team. A female greater kudu calf was born Oct. 11 and named Madison for pitcher Madison Bumgarner. And a critically endangered female eastern mountain bongo calf born Oct. 22 was named Pence after the team’s right-fielder Hunter Pence. There are only 100 bongos left in the wild in Kenya. Last night, the Giants won the World Series against the Kansas City Royals in game 7, and the senior staff at the Kansas City Zoo has agreed to stand in front of their sea lion enclosure wearing the Giants black and orange colors with signs that say “We’re not lion, the Giants beat us fair and square.”