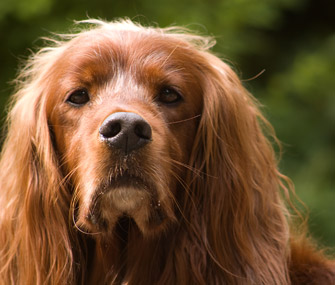 PRA is term that describes a group of genetic diseases of the eyes in which the unexplained degeneration of the retina (the vision-sensing mechanism at the back of the eye) can lead to vision loss. Most often seen in dogs (only rarely in cats), it is typically classified as generalized (GPRA) or central (CPRA).

GPRA is characterized by the gradual loss of vision in both eyes as a result of the loss of the retinal cells that sense light (photoreceptor cells we refer to as rods and cones). Early- and late-onset forms of the disease exist. The early version is typified by an abnormality in the development of these cells, resulting in vision problems during the first few months of life. In the late-onset form, the cells develop normally, but degenerate later in life, causing the first vision problems around three to five years of age. Humans can suffer a similarly devastating disease process called retinitis pigmentosa.

Central progressive retinal atrophy, a rare form of PRA, is also known as retinal pigment epithelial dystrophy (RPED). It’s a disease in which the pigmented epithelium (superficial coating of the retina) degenerates and loses its ability to process light — and consequently affects vision. CPRA tends to occur in older dogs, and has been associated with vitamin E deficiencies. Luckily, it’s slowly progressive, and not all affected dogs lose their sight.

GPRA usually begins with the loss of night or dim light vision, then progresses to an inability to see in bright light, eventually resulting in blindness. Many dogs may compensate for the gradual loss of vision, so owners may not notice until their pets are quite visually impaired. Unfortunately, this means the process is significantly advanced before the disease is typically identified.

In early-onset GPRA, loss of night vision usually occurs before six months of age, leading to complete vision loss within a year or two. The speed of progression of these signs can vary widely among dogs.

In late-onset GPRA, night blindness may be noticed between three and five years of age, progressing to total blindness by six to nine years of age. Some dogs may also develop cataracts, making diagnosis more complicated.

With CPRA, the insidious nature of the process is even more pronounced. That’s because peripheral vision may be retained for a long of time. Interestingly, a CPRA-affected dog’s vision may actually be better in dim light as well as for faraway and moving objects, thereby allowing owners to assume that vision remains acute, even while it’s becoming severely impaired.

In the case of rare CPRA, the following breeds are often affected: Border Collie, Golden Retriever, Labrador Retriever, Shetland Sheepdog. Interestingly, European lines of these breeds are reportedly more affected than others.

There is no known treatment for this progressive disease, though secondary cataract removal, if done very early in the disease process, may aid in vision retention for some time.

While the condition is incurable, it is not painful for pets, and most pets function quite well, even when they lose their vision completely.

PRA sufferers should be removed from the genetic pool as soon as they are identified. DNA tests are now available for many breeds to aid in the early identification of this disease.

CERF (Canine Eye Registration Foundation) certification in affected breeds prior to breeding is considered mandatory for prevention of late-onset GPRA or CPRA in any offspring.

Find out which pets are your best… ›
READ MORE: Dogs, Dog Health