The Scoop on Digestion 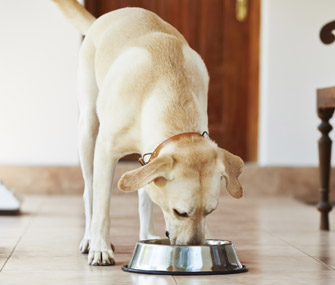 Thinkstock
Markers of a pet with a well-digested diet include good health, normal weight and formed but not overly hardened stools.

When I was 8 years old, there were few things my dog Taffy enjoyed more than mealtime. It was the 1980s, and we chose our kibble based on things like sale price, the dog pictured on the label and whether or not we thought Taffy might like it. Taffy’s favorite food was a kibble that turned into a gravy-laden mess when water was added, ensuring that our beige couch would soon be coated in crusty, brown streaks when she wiped her long Lhasa Apso beard on the upholstery after every meal. I don’t think we ever once questioned whether it was a quality food; we just liked the picture on the bag.

Things sure have changed since then. With the wealth of information available online, pet parents have become increasingly savvy and now have a growing understanding of the importance of good nutrition in promoting their beloved pet’s long and healthy life. The only thing we haven’t quite agreed upon is what defines good nutrition. Talk to 10 pet owners and you’ll get 10 different opinions as to the best diet available. Buzzwords are tossed around like confetti, little sparkling gems that we know are significant without entirely understanding why. Need an example? Let’s talk digestibility.

What Is Digestibility, Anyway?

The digestibility of a foodstuff refers to the percentage of ingested food that is absorbed by the body. So, if a food is 75 percent digestible, that means for every 100 grams of dry matter swallowed, 75 grams are absorbed by the intestines and 25 grams are excreted in the feces. (Water is not included in this calculation.)

This can get confusing very quickly. Digestibility calculations are not a required disclosure on pet food labels. Labels tell you the minimum crude percentage of protein, fat and fiber, but that doesn’t indicate how well those ingredients are absorbed and digested. You can be holding two bags of pet food that both indicate a crude protein percentage of 17 percent, but if food A contains a protein with a higher digestibility than food B, the pet will actually be absorbing more protein, bite for bite, from food A. For this reason, pets can eat smaller volumes of a highly digestible food and receive the same nutritional benefit as larger volumes of a food made from ingredients with lower digestibility.

The Proof Is in the Poop

So, as a pet owner, how do you know which pet food is the most digestible? Without a chemist following your dog around every morning and grabbing a stool sample to evaluate on a molecular level, we are stuck with a more nebulous way to evaluate the body’s efficacy in utilizing a food: What does the stool look like?

We in the veterinary field spend a lot of time asking owners about pet poop. I’m sorry about that, but it really is a helpful health indicator. As you might expect, pets who are absorbing a higher percentage of the food they ingest tend to produce less stool. Pet owners who change food and suddenly find that Fido is running to the backyard four times a day instead of two—and generating twice the volume of poop—may be able to blame the change on reduced digestibility of the new food, although other factors can also come into play. If Fido requires twice as much of his new food to satiate his appetite, you may also come to the same conclusion, although other factors can be involved here, as well.

Digestibility Is Only Part of the Picture

So, low digestibility automatically indicates poor quality, right? Or does it? Is high digestibility the sole hallmark of a good food? Think about this: If all you ate every day was a jar of honey, you would probably spend very little time on the toilet. If you ate a kale smoothie for breakfast followed by a spinach salad for lunch and a carrot and chicken medley for dinner, it would be a much different scenario. Those veggies are much less digestible than straight-up sugar, but which menu do you think is the healthier choice? Digestibility is only part of the picture.

The body is made to produce poop, which brings us to fiber. Fiber, the indigestible portion of plant walls, is a good and necessary part of the diet, a chimney sweep of the colon, if you will. You want your pet’s colon to follow the Goldilocks rule when it comes to poop: not too much, not too little, but just right. The correct amount of fiber protects against both constipation and diarrhea, holding onto water as the indigestible solids pass through the GI tract while also helping modulate GI contractions.

As a pet owner, the best indicator of a well-digested diet is a pet in good health, who has a normal weight and produces formed, but not overly hardened stools once or twice a day. The pet should not strain to defecate. There can be some deviation from this depending on the pet, of course. For example, pets with specific inflammatory conditions of the bowel may benefit from low-residue diets that produce smaller than normal amounts of stool, while pets on weight-loss or diabetes-management plans may benefit from diets with higher than average levels of fiber. As always, your veterinarian is the best source of information and guidance for food selection.