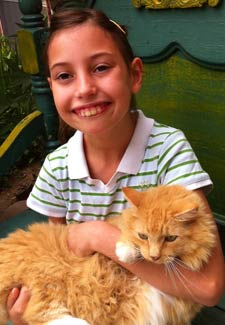 Emma Stone and her cat, Kitty

When Katie Stone, a radio producer based in Albuquerque, N.M., decided to adopt a kitten for her daughter, Emma, she never expected that their cuddly, orange pound cat would turn out to be an uncanny lifesaver. In fact, Kitty lived in the Stone household for three years before she showed off her unique talent: The cat can alert the family when Emma is having a seizure. It all started in January 2011, when Emma was sidelined on the couch with a fever of 104.5. One minute, she was fine, and the next, she was having a seizure, inspiring Kitty to stand on top of Emma and break out in a cacophony of uncharacteristic yowling and crying. “At first, I thought it was a fluke,” Katie says. “When it happened again the next day, I knew that we had a cat with a special gift.”

Emma was no stranger to seizures — she’d been taking medication to control them for years — but the unusually high fever had brought on what her neurologist identified as a complex partial seizure. Emma was lucky that Kitty was close by and on alert, because these types of seizures tend to be harder to detect since they don’t typically cause a full-body jerk. In most cases, complex partial seizures show up as more of a subtle twitch.

Although there are organizations in the United States that train dogs to help people with seizures, such as 4 Paws for Ability, stories of feline seizure specialists are less common. One notable case concerns a cat named Lilly residing across the pond in Bournemouth, England. When her owner, Nathan Cooper, is about to have a seizure, Lilly dashes to find and alert his mother within five minutes of the event.

Hopefully, Emma won’t have a repeat episode, but her mother is pleased to know that she has a four-legged alarm system looking over her daughter. “When we first got Kitty as a kitten, Emma would clutch her tight to her chest at night, almost like a Vulcan death grip,” Katie says. “From that day on, Kitty knew she had to sleep with my daughter, and she’d cry outside Emma’s door if she was locked out. Now, we always make sure that door is open.”

How to Care for Cats