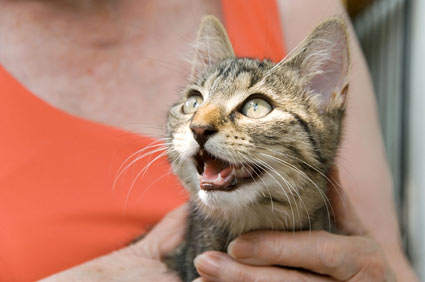 Cat refuse to snuggle with you while you relax on the couch? Join the cat owners’ club! Only the cuddliest kitties will tolerate being picked up and held — even for a short while. Why? Consider it yet another reason cats have a reputation as independent creatures who prefer to make up their own minds about how they interact with us.

But there are plenty of other reasons your cat scampers away when you try to hold her. Some cats were never socialized well with humans as kittens; others may never feel safe in a human’s arms because they are afraid of being dropped. And older, more frail cats may find it uncomfortable to be scooped up because the unexpected movement can cause joint pain.

In any case, most cats can be convinced to sit on or next to you when lured with treats –– just not necessarily in your arms.

Remember, cats tend to think the only good ideas are theirs. And being suddenly lifted four feet in the air was probably not on kitty’s agenda for the day.

Google+
More Featured Articles › Why Does My Cat... Have a Tongue Like Sandpaper?

How to Care for Cats

Find out which pets are your best… ›
READ MORE: Cats, Cat Behavior, Veterinarian Written, Why Does My Cat