Home ›
Dr. Marty Becker ›
4 Injuries That Can Take the Wag Out of Your Pet's Tail 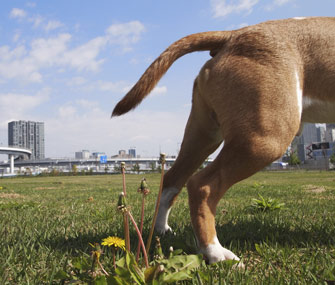 Have you ever noticed that dogs and cats are inadvertent tattletales? I can tell a lot about how a pet is feeling by whether a tail is wagging or waving happily, bristling angrily, or tucked between the animal's legs in fear. The tail tells all. When the tail is injured, however, a lot more can be at risk than a dog or cat’s ability to communicate.

How the Tail Works

The tail is an extension of the spine, but it’s more mobile and flexible. A wedgelike bone at the base of the spine known as the sacrum anchors the tail. The subsequent tailbones (coccygeal, or caudal, vertebrae) get smaller and smaller along the length of the tail. Cushioning each tailbone are tiny joints and disc pads. Muscles put the wag in the tail and play a role in fecal control. Blood vessels and nerves are also part of the tail’s anatomy.

When the tail is injured, the damage can be as simple as the “Ouch!” from getting the tip caught in a doorway or as serious as heavy bleeding or severe nerve damage. The bottom line? The tail is prone to injury because it’s unprotected and frequently in motion.

Here are four ways that things can go wrong at the tail end of your pet.

Abrasions: Sometimes an accident causes scrapes, hair loss and bleeding. This can happen with cats, for instance, whose tails are mangled in a car engine. Not a winter goes by that most vets in places where it gets cold don't have a cat come in with a fractured or injured tail from getting it caught in the fan belt of a car. Before you start your car, follow my advice and “Knock, knock on hood!”

Clean minor scrapes and dab on some antibiotic ointment, but take your pet to the veterinarian right away if the tail is bleeding or has serious skin or hair loss. A tail wrap can protect the skin while it heals. When skin damage is severe or extensive, healing can take a long time, and it can be painful. Sometimes shortening the tail — take a little off the top, please — is a better way to resolve the problem. The good news is that your pet won’t miss the piece that’s gone.

Happy tail: This type of injury occurs when a dog with an outgoing personality and a long tail repeatedly thwacks the tail against a hard surface such as a crate or wall. Really happy dogs — think Golden Retrievers or Cavaliers — or dogs with thin, delicate skin, such as Greyhounds, wag so hard and fast that a bleeding ulcer can develop on the tip of the tail. In chronic cases, the only solution is to amputate the end of the tail. Despite the name, there's nothing happy about this injury.

Fractures: Most commonly, tail traumas occur when a dog or cat is hit by a car, but the tail can also break when it gets on the wrong side of a closing door, is stepped on by your mother-in-law or hits the floor wrong when the pet falls off the sofa or bed. A simple fracture that occurs toward the end of the tail usually heals just fine on its own. Your pet won’t have to wear a cast or have surgery. The only clue that there was ever a problem might be a kink or bump in the tail, which develops because there’s no way to hold the tail still while it heals. Occasionally, though, amputation is necessary if the little tailbones are crushed or separated.