Home ›
Dr. Marty Becker ›
5 Signs Your Dog May Have Arthritis

5 Signs Your Dog May Have Arthritis 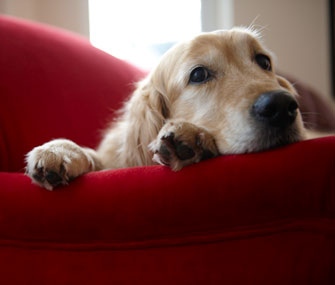 Is your dog getting up a little more slowly than he used to? Does a rousing game of fetch leave him limping later? Has he opted out of climbing stairs?

If so, you may be assuming that your dog is just “old” and you can’t do anything to help him. This may be true, but another possibility might be arthritis — and recognizing it is the first step to getting him back to normal function.

How do you know if your dog might be suffering from arthritis pain? Here are five signs to look for.

The ABC's (and D and E) of Arthritis Symptoms

A - Ain’t doing right: Some times in your dog’s medical records you may see the notation “ADR.” That stands for “ain’t doing right,” and it's veterinarian shorthand for a pet who just isn't acting like himself. Yes, it’s vague, but it’s based on sound observation by the pet's owner. Some people would barely notice a gaping wound on their own leg if it weren’t pointed out to them but will detect very small changes in their pets' health and behavior. They may not know what to make of those changes, but they know they need to get to the veterinarian because something is clearly wrong. That observation — that a pet "ain't doing right" — is a good place to start when you're talking about arthritis.

B - Behavior changes: Shifts in behavior are often the first clue that something — anything — is wrong with your dog. When you're talking about arthritis pain, decreased appetite is one of the most common signs. Dogs don't feel like eating when they're hurting. But, really, any behavior that’s out of character for your dog may be a sign of pain, including snapping, “forgetting” house-training or appearing agitated. Sometimes these are obvious signs — it's hard to miss a pile in the living room or ignore a sweet dog who suddenly nips at your hand — but often these changes fall into that whole “ain’t doing right” area. Something’s “off” with your dog, but you can’t say exactly what it is. That's how you know it's time to see your vet.