My love of knowledge has been a guide in my life and has taken me far from the Idaho dairy farm on which I grew up. It’s one of the reasons why travel has always been so important to me — I’ve been to more than 80 countries, and my wife and I have taken our children to many as well.

Even when I’m not in motion, I like to keep learning. And it should come as no surprise that much of what interests me has to do with pets. While the human-animal bond has always been of special interest to me, the fact is that the quirkier bits of trivia appeal to the perpetual student in me — particularly when it comes to cats. 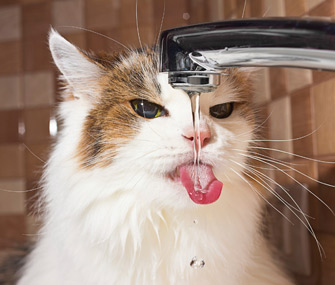 Thinkstock
Thanks to an engineer's slow-motion video, we now understand the fascinating science of how cats drink.

The Element of Surprise

I love to surprise others, and I hope I catch you saying “I didn’t know that!” with these five crazy cat facts.

A cat’s tongue is magic. Well, not really. But it sure seems that way if you watch a slow-motion movie of a cat drinking water.A cat’s tongue breaks the surface of the water and returns to the mouth too quickly for the human eye to follow well, dragging a column of water up with it. The cat’s mouth then captures the water before gravity pulls it down. We know this because an engineer at the Massachusetts Institute of Technology used one of the university’s specialized cameras to record the motion at 120 frames per second, then analyzed the result. The result was published in the prestigious journal Sciencein November 2010. MIT professor Roman Stocker told Wired magazine that this discovery could have implications when it comes to the design of robots.

Cats have more bones in a key part of their spine than people do. Cats have a combined 20 thoracic and lumbar vertebrae, compared with 17 in people. The number of bones in the mid-spine region accounts in part for the power and flexibility cats have when it comes to fast acceleration and leaping ability. Cats are capable of attaining speeds of more than 30 mph for very short distances — just a few yards — which is a perfect skill if you’re a stalk-and-pounce predator. And cats can jump several times their height, flying over fences to the disgust of many a cat-chasing dog. Their other anatomical oddity is a free-floating collarbone, which can enable a cat to fit through an opening the size of its whisker span. That is, unless he’s fat, which too many cats are these days.

Some calico cats are male. Yes, I still hear people saying that all calico cats are female, along with tortoiseshell and related “dilute” versions (gray instead of black fur, and shades of yellow instead of bright orangey-red). If you were to make a bet that a calico is female, you would probably win, but there's no guarantee: Approximately one calico in 3,000 is male, thanks to a genetic oddity known as “Klinefelter syndrome,” in which an animal has X and Y chromosomes, making it a male, but also has an extra X chromosome (which allows for the expression of the calico coat pattern). By the way, betting that an orange tabby is male isn’t as good a bet, for reasons I have previously explained.