Are Black Cats in Greater Danger Around Halloween? 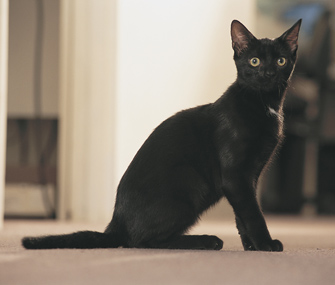 Q. Our shelter won’t adopt out black cats at Halloween, claiming that they might be in danger. Another local shelter offers a black cat adoption special. What’s the deal?

A. Shelter policies based on urban myths put pets at higher risk than they ever could be from people who’d adopt with ill intentions. In other words, shelters that refuse to allow the adoption of black cats around Halloween are well-intentioned but wrong.

For years now there have been concerns, based on little more than hearsay, that black cats are sought out on Halloween for Satanic rituals. Other less over-the-top versions of this myth include concerns about teenage animal abusers and people who want a black cat solely as a Halloween party decoration. In the meantime, people who'd offer perfect homes for these pets may not come into the shelter at all while an adoption ban is in effect.

What about the frequent disappearances of cats, or the gruesome finding of feline remains? Forget Satanic rituals; in the majority of these cases the explanation is sadly ordinary. When a cat doesn't come home, it's most likely because it has been hit by a car, poisoned (on purpose or by accident), or trapped as a feral and killed. In the cases of mutilated cats, experts blame the incidents on increasing numbers of hungry urban coyotes — not on Satanic partygoers. (Is it any wonder why so many veterinarians encourage that cats be kept indoors?)

"There is no evidence that black cats are at special risk of abuse if adopted around Halloween," says Francis Battista, cofounder of the Best Friends Animal Society. "The only thing that such a fear-driven policy does is put more cats of every color at risk of dying in shelters due to overcrowding." In shelters that kill for population control, holding animals out of consideration for adoption puts them at high risk of not being around when the ban on adoptions is lifted.

As I said, I recognize that such policy decisions are made with the best of intentions. Black cat policies used to be widespread until influential national groups such as Best Friends started advocating for them to be dropped, pointing out the lack of evidence and suggesting that effective year-round screening of potential adopters (checking references, etc.) would likely weed out any bad apples.

The best shelters today don’t look for reasons not to adopt out pets. They recognize that powerful, positive marketing (such as through the Shelter Pet Project and Petfinder) helps get pets into great homes. The shelters that put black cats “on special” are using a “hook” to get people thinking about adoption.

There’s nothing to be scared of and it’s not a trick. When marketing pets, these shelters may discount adoption fees, but they don’t change their sensible policies on screening potential homes. More pets getting adopted? Now, that’s a Halloween treat.