Are Laser Pointer Toys Really Safe for My Cat? 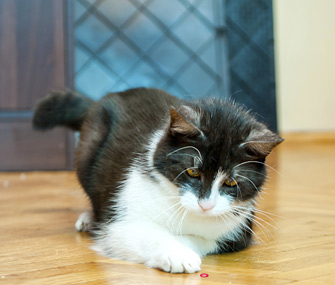 Thinkstock
Laser pointers can be fun for cats as long as you eventually switch toys to something else that can be caught and "killed."

Q. Are laser pointers safe? My cat really goes crazy when I get his out to play.

A. As with so many other things, I have to give an answer and a caveat. For many cats, laser pointers are wonderful for getting in a good workout. For indoor cats, especially, pretty much anything that gets a cat moving is a good thing. But for some cats, these toys have been blamed for the development of compulsive behaviors such as excessive grooming.

The worry most people have regarding safety is about the laser itself. Of course you shouldn’t shine the light into your pet’s eyes (or your own) on purpose, but you don’t have to worry if the beam hits an eye for a split-second in play. The potential problem with these toys comes because the cat can never “win” the game. Even if a cat catches the dot there’s nothing there. The cat gets all worked up with no resolution — every time. Even in the wild, a hunting cat will catch the prey now and then. But there's no catching that alluring, fast-moving red dot!

Though most cats will wind down from their hunting high with no harm done, some will redirect their frustration in ways that can hurt themselves or others. There ’s an easy way out of the problem, however. After some quality time with the laser pointer, switch toys to something that can be caught and “killed,” such as a toy on the end of a fishing pole or a stuffed mouse. Your cat can then wind down with the satisfaction of having won the game, with “dead prey” to show for his hunting prowess.