Home ›
Dr. Marty Becker ›
Are Some Cat Breeds Smarter Than Others?

Are Some Cat Breeds Smarter Than Others? 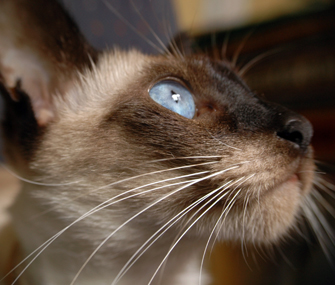 Q. You know how some breeds of dog, like Poodles and Border Collies, are supposed to be smarter than others? Is there a ranking like that for cat breeds?

A. When we produce rankings of dogs based on how “smart” they are, what we’re often really ranking is how interested a dog is in learning and doing what we want him to do. When you think about it that way, it’s not a surprise that cats don’t seem that “intelligent” overall.

But think about it another way: Dogs who rank far down the list when it comes to "smart" actually excel at the tasks for which they were developed. Afghan Hounds, for example, are often placed at or near the bottom when it comes to intelligence, but their brains can often outthink fast-running prey in the field, making decision after decision instantly … and at 40 mph. That seems pretty smart to me!

Cats Will Be Cats

Cats are extremely efficient hunters — so efficient that they can sleep some 20 hours a day and still catch enough vermin to survive. They’re not lazy, and they’re not stupid. What they are ... are cats. And they’re very, very good at being cats. That's pretty smart, too!

Remember that the overwhelming majority — more than 90 percent — of cats are random-bred. That explains why interest in pedigreed cats isn't anywhere near as high as it is for purebred dogs, which count for roughly half of all dogs. Remember, too, that there's a fairly small range in appearance, size and behavior traits among cat breeds. That's sure not true among dog breeds — think Chihuahua, and then think Great Dane. That kind of explains why there's not as much evidence-based information on cat breeds — and their intelligence — as there is on dog breeds.

As for rankings of intelligence by cat breed, again, what’s being ranked (as in dogs) is often the interest a cat has in interacting with us and doing what we want. The cat breeds who are anecdotally considered better at interacting — and therefore are considered smarter — are those lighter, more athletic breeds known for being more “busybody” than other cats, primarily the so-called Oriental breeds such as Siamese and Burmese, and also the Bengal.