Home ›
Dr. Marty Becker ›
Can a Dog Train for a Marathon?

Can a Dog Train for a Marathon? 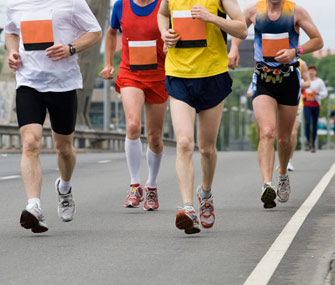 Most of my professional life, it seems, has been spent trying to help pet owners deal with the health issues of unfit or overweight pets. The problems of pet obesity are so severe and widespread that I was caught off guard recently when a dog owner asked me for advice about having her dog run with her as she trained for a marathon.

While I'm always delighted to hear from pet owners who understand the value of exercise — for themselves and their animals — running for fitness is not my area of expertise. When you’re raised on a dairy farm as I was, fitness comes naturally, by way of being alive. We never stopped moving, and who needs weight-lifting when there are hay bales to move?

I do work out daily under the loving guidance of my wife, Teresa, who’s an expert in fitness and nutrition. And I still move those hay bales. But the running I do is pretty much in airports, which is why I turned to an expert for help with this topic. Bob Halpenny is an experienced distance runner who trains other people for marathons through his work at Fleet Feet in Sacramento, Calif. He is also the owner of On the Trail Dog Fitness, a service that takes dogs out for regular runs.

Halpenny, 63, has run for 40 years, and started racing in 2000. He prefers ultra-marathons himself, and routinely runs in 50-mile races. Last year, he met a lifetime goal and finished the Western States 100-mile run, and he's in training to repeat his accomplishment. Through much of his personal trail training, he has had a dog of his own alongside him. His current running companion, a year-old Border Collie named Roy, is still limited to what Halpenny calls “puppy trots” of two to three miles. "You can’t start real distance training until a dog is a year or even 18 months old,” he says. I agree, and as a veterinarian, I would add that in the same way humans are told to visit their doctor before starting any fitness program, checking in with your pet's veterinarian before heading out for a long run is highly recommended.

Should Your Dog Train With You?

Most of the dogs Halpenny runs with for clients are good for a couple of miles, he says, but most aren’t that interested in distance running. He mentions a Boxer named Sugar who has been running with him nearly all her life. “She loves our runs, but the two to three miles we do regularly is enough for her,” he says.

His own dogs have all been Border Collies, and even in that hard-working breed, Halpenny has had enthusiastic partners in distance running, and those who’d rather stick to shorter runs, even with good training to build their physical capabilities. “My dog Gemmy would do 20-mile mountain runs with me,” he said, “and go on all my client runs as well. She loved it.”

If you’re thinking of a dog for distance running, Halpenny recommends sticking to breeds or mixes of breeds developed for long periods of steady work. Herding dogs were developed to work for hours, as were many hunting and hound breeds, as well as sledding breeds. Smaller dogs may not be able to handle long-distance endurance running, says Halpenny, nor can dogs with compromised respiratory systems or abnormal anatomy, such as Bulldogs or Corgis (although any dog can benefit from getting out for shorter walks or runs, he notes).