Can Calico Cats Be Male? 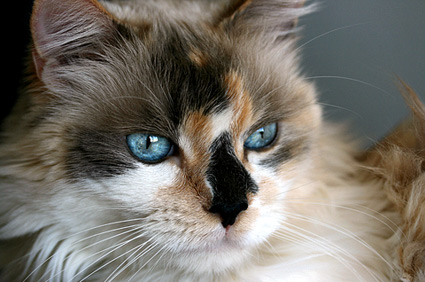 A. Not true in either case. But male calicos are rare: Only one out of every 3,000 calico cats is male, according to a study by the College of Veterinary Medicine at the University of Missouri.

The gene that governs how the orange color in cats displays is on the X chromosome. Any cat, male or female, can be orange, but in males the color is nearly always expressed in the tabby (striped) pattern, sometimes called a ginger tom. Females can be orange tabby, calico or tortoiseshell. (The last two are genetically similar, except the calico has patches of white, orange and brown or black, and the tortie’s colors are orange and brown or black swirled together.)

Because the orange is divided among tabbies, torties or calicoes in females, there are fewer of each type. And because orange is almost always associated with tabby in males, it seems as if there are more orange males than orange females. That’s probably the case, but no one's counting.

The XXY combination is a genetic rarity that occasionally shows up in cats (people, too). And if both X chromosomes carry the calico blueprint, you’re looking at one rare cat: a male calico.

Such XXY animals are called Klinefelter males, after the doctor who first described the condition. If you have a male calico and think you can make money breeding him, you probably won’t. Though lovely, the cats are usually sterile.