Can Cocoa Mulch in Gardens Harm My Dog? 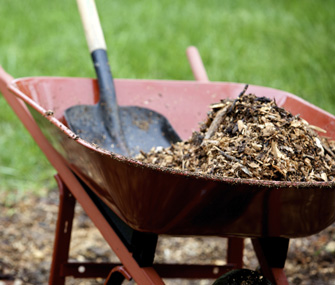 Q. A couple of people in my neighborhood have cocoa mulch in flower beds near the sidewalk. When we go for a walk, my dog is very attracted to the smell. (I am too — it's yummy!) I know chocolate is deadly poison to dogs, but how about this stuff?

A. Let's back up. While chocolate should never, ever be given to dogs, its toxicity is highly variable based on the darkness of the chocolate (the darker the chocolate, the higher the danger) and the size of the dog (the smaller the dog, the bigger the danger). A large dog (like a Labrador) who eats a pound of milk chocolate is probably not in grave danger of anything except tossing up that candy all over your carpet.

So what about cocoa mulch? Like chocolate itself, there's no one answer when it comes to toxicity, except that it shouldn't be eaten at all. The ASPCA's Animal Poison Control Center lists cocoa mulch on its list of hazardous garden substances. The symptoms of ingestion can be the same as with chocolate itself: vomiting and diarrhea is common in some dogs as well as a rapid heart rate, muscle tremors and acting hyper. Seizures are also possible. (Cocoa mulch — like chocolate — is also toxic to cats, but they're far less likely to eat any of it.)

Given those potential problems, I can't recommend that pet owners use cocoa mulch in their yards, or at least in the parts of their yards to which animals have access.

Of course, you can't change what your neighbors use on their own properties. Instead, keep your dog on a leash and teach the "leave it" command. My daughter, Vetstreet pet trainer Mikkel Becker, demonstrates the easy steps in this video.