Do Pets Get Depressed? 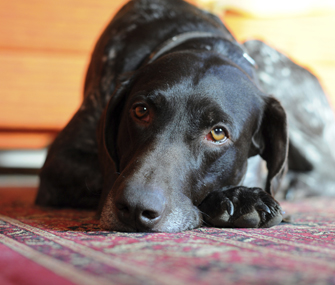 As our dogs and cats have migrated from the barnyard to the backyard to the kitchen to the bed, we veterinarians have noticed that sometimes the concerns of our clients seem to be more human in nature when talking about our four-legged family members.

Before, when someone said to me that a dog or cat was “depressed,” I’d figure they meant he was lethargic, one of the many vague symptoms of what we veterinarians call the ADR (“Ain’t Doing Right") pet. But now, chances are decent they’re talking about the possibility of a mental illness and are worried that their pet may be clinically depressed.

Can Pets Really Be Depressed?

I think it's possible pets can be depressed. After all, we know that depression is a chemical imbalance in the brain that’s treated with selective serotonin reuptake inhibitors. I think it’s reasonable to think that this chemical imbalance occurs in animals other than humans. Do I know that based on research findings? Not really, and veterinarians are not currently able to assess or treat this condition, if it exists. But that doesn’t mean it couldn't exist in some pets. As a colleague of mine, world-famous veterinary cardiologist Dr. Paul Pion, co-founder of the Veterinary Information Network, is known to say, “What’s amazing about medicine is not what we know, but what we don’t know.”

Antidepressants are used in veterinary medicine, of course. Their use was pioneered by another well-known colleague, Dr. Nicholas Dodman at the Cummings School of Veterinary Medicine at Tufts. They aren’t used to treat depression, however, but many different kinds of behavior issues, such as obsessive-compulsive disorders and separation anxiety. When Dr. Dodman started using them in treating dogs, it was so cutting-edge that it made the front page of The Wall Street Journal. Now, it’s pretty routine, and most veterinary behaviorists have it in their arsenal.

At this time, however, if a pet were brought to me as “depressed,” I wouldn’t dismiss it as nonsense, but I still would have to look for issues better understood and treated by veterinary medicine. That takes me back to the ADR pet.