Help Us Get Langley and Idaho Adopted 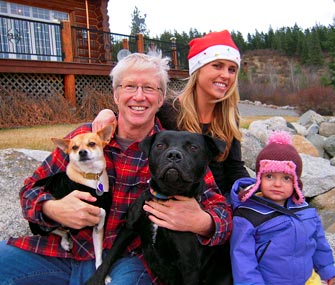 Dr. Marty Becker with his daughter, Mikkel Becker, his granddaughter, Reagan, and his adopted dogs, Quora (left) and Gracie, who Dr. Becker adopted last Christmas after she spent two years in a shelter.

We're having a holiday pawty for pets — and the gift we want you to bring is a home for some wonderful animals. But, first, let me ask you: What do you think about pets who haven't been adopted after spending a couple of months in a shelter? Would you assume there is something wrong with them?

And how about a pet who has been in a shelter for a couple of years? Who’d be crazy enough to take home a pet like that, right?

That person would be me — and that pet changed my life. And one just like her can also change yours. You just have to open your heart, as well as your mind, to the possibilities of adoption. (Read on for the stories of two special pets who could fill your heart with plenty of love this holiday season.)

I did. My daughter, pet trainer Mikkel Becker, recently did the same, too. And we've never regretted it.

A Match Made on Christmas

On Christmas Day last year, Mikkel and I decided to make the rounds of some shelters in northern Idaho to take gifts to pets who hadn’t gone home for the holidays. My wife, Teresa, stayed home to care for Reagan, Mikkel’s daughter, while Mikkel and I loaded up toys for the shelters, with help from the staffs of the Lakewood Animal Hospital and North Idaho Animal Hospital, the two places I practice when I'm not on the road.

At Second Chance Animal Adoption, I met a dog named Gracie, a 2-year-old Lab-Pit mix who'd been in the shelter her entire life. She had something wrong with her legs, and she wasn’t particularly attractive. She was just an ordinary dog, and few had ever given her a second look — even at Second Chance.

Gracie and I looked at each other, and we both knew she'd just found her new home. She came home with me that day, and no one was more stunned than the shelter director when I told her I was adopting Gracie.

Less than a year later, it happened again. This time it was Mikkel who found her heartstrings tugged by a three-legged cat she named Nemo, after Reagan’s favorite movie.

In our family, we never regret the decisions we make, and this Christmas, we want to encourage others to realize that there’s no "shelf life" when it comes to shelter pets. Whether the animal has spent one week, one month or a year in a shelter, the dog or cat you were meant to adopt is waiting for you, if you just do what we did — open your heart and let the love in. 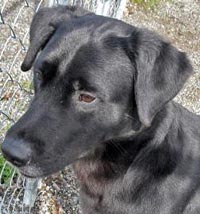 Langley is up for adoption in Idaho.

To help get you started, we’ve found two pets — a dog and a cat — who we think both need to have a little spotlight shine on them. The first candidate is Langley, who's been homeless since last March, when his family lost their home. He’s at one of our shelters here in Idaho, the Kootenai Humane Society, near Coeur D’Alene. Like my beloved Gracie, Langley isn't terribly photogenic — black pets generally don’t look good in pictures, so they tend to get overlooked on Petfinder.

But that’s about all you can find wrong with this wonderful 3½-year-old Labrador Retriever. He’s active, playful, friendly and highly motivated to learn new behaviors with treats. He'd be perfect for an active family — maybe even yours.

Now, about that cat. One of my Facebook fans mentioned him to me, and I sat up in my chair when I clicked on the link to his adoption page: His name is Idaho! No doubt about it — this Idaho boy needs a little help from another Idaho boy, like me. 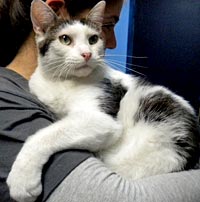 Idaho is up for adoption in New Jersey.

Idaho is a long-time resident (more than five years!) of the Plainfield Area Humane Society in Plainfield, N.J., and he’s as calm as Langley is active. The shelter staff thinks he has been overlooked because of his laid-back manner. He’s a sweet-natured, middle-aged cat, who wants nothing more than to curl up in a lap. Could that lap be yours? While Mikkel and I are determined to get Idaho and Langley new homes before I celebrate the one-year anniversary of adopting my Gracie, we’re also going to share stories of other long-time shelter pets who need to move out of cages and into the loving arms of adopters.

Will you please spread their stories through Facebook, Twitter and other personal connections, so we can make sure these special pets are home before the New Year?